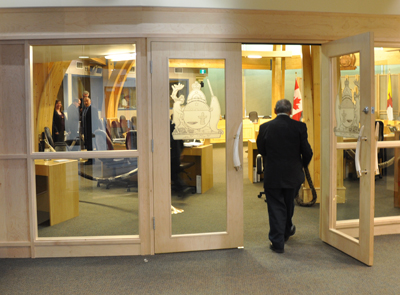 After meeting behind closed doors all week, the Nunavut legislative assembly’s standing committee on legislation says it recommends that the Nunavut government not proceed with Bill 37 and that it should be allowed to die on the order paper. (PHOTO BY SARAH ROGERS)

After months of vigorous debate and community consultation, Bill 37, an Act to Amend the Education Act and the Inuit Language Protection Act, might have reached the end of its life.

The Nunavut legislature’s Standing Committee on Legislation, tasked with reviewing the controversial legislation this week, said May 5 that it will recommend the bill not proceed.

A final decision will likely be made during the legislative assembly’s spring sitting, scheduled to begin May 29.

“Given the overwhelming lack of consensus in support of the bill in such areas as language of instruction, the role of District Education Authorities and increased employment of Inuit teachers, the standing committee is of the view that it should be allowed to fall off the order paper when the current Assembly dissolves later this year,” the committee’s chair, MLA Tom Sammurtok, said in a May 5 statement.

Individuals and organizations had until April 21 to make written submissions on the bill to the assembly. Those submissions are expected to be tabled when the legislature sits again.

The committee was scheduled to meet and review the bill in Iqaluit this week, although how and why members reached their conclusion remains unclear—the discussions were held in camera.

But at least four organizations called for Bill 37 to be withdrawn and re-written. Nunavut Tunngavik Inc. made its submission public earlier this week in which its president, Aluki Kotierk, said the proposed legislation sets Nunavut back in its efforts to address the decline of Inuktut across the territory.

“This bill has too many shortcomings, has stirred too much public concern, and is too important to be made into law,” Kotierk wrote on behalf of NTI and the three regional Inuit organizations.

A major sticking point was a section of the bill that delayed the implementation of Inuktut instruction in Grades 4 to Grade 9 from 2020 until 2030.

“I am relieved they recognize that the issue of Inuktut language loss is urgent,” Kotierk said in reaction to the standing committee’s announcement May 5.

It’s unclear what will happen next for Bill 37, which received second reading during the legislature’s winter sitting.

At this stage in a bill’s life, the committee would typically report back to the House to proceed to the clause-by-clause reading of the proposed legislation, at which point the minister appears before the committee of the whole.

Education Minister Paul Quassa said that’s where concerns around the bill should be directed.

“There is a process to follow when a bill is put forward to the Legislative Assembly, and it is very disappointing that standing committee has not provided the public with an opportunity to understand the pros and cons of their decision,” Quassa said in a May 5 statement.

“I remain open to working with the members to address their concerns and ensure that a thorough review is carried out.”

The bill could still go to a vote, but the standing committee’s announcement suggests there is no longer enough support to carry it through.