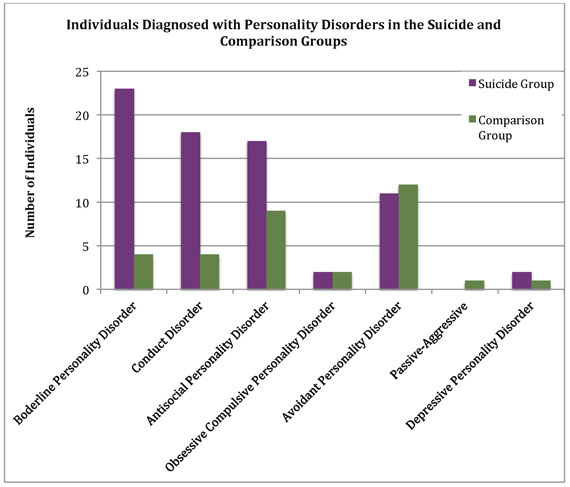 This graph shows that people in Nunavut who died by suicide between 2003 and 2006 were far more likely to be diagnosed with borderline personality disorder than members of the living group they were compared with. (SOURCE: LEARNING FROM LIVES THAT HAVE BEEN LIVED) 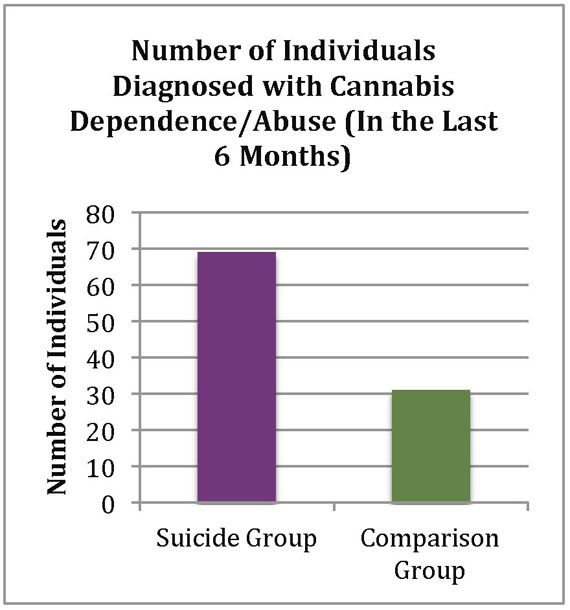 This graph shows that people in Nunavut who died by suicide between 2003 and 2006 were far more likely to be cannabis abusers than the living group they were compared with. (SOURCE: LEARNING FROM LIVES THAT HAVE BEEN LIVED) 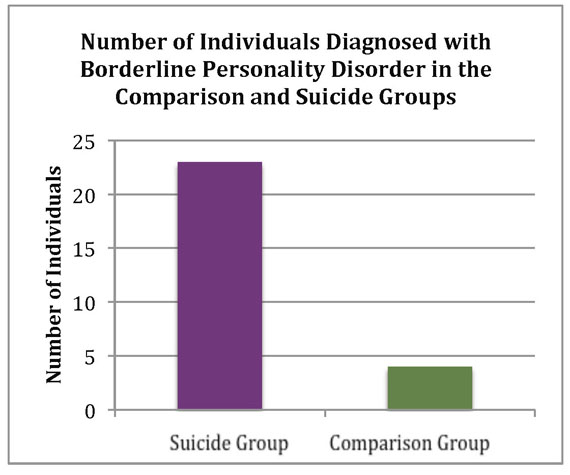 This graph compares the extent of personality disorders among those who died by suicide between 2003 and 2006 with members of a living that researchers compared them with. (SOURCE: LEARNING FROM LIVES THAT HAVE BEEN LIVED)

And physical and sexual abuse in childhood is also big factor.

Researchers with the Douglas Mental Health University Institute, a Montreal psychiatric hospital affiliated with McGill University, produced the study by reconstructing the life stories of 120 Nunavut Inuit who died by suicide between 2003 and 2006. (See document embedded below.)

To find risk factors for suicide, they compared those accounts with the life stories of 120 living people chosen from the same communities who were of the same gender and age as the suicide completers.

That comparison revealed child sexual and physical abuse, depression, certain personality disorders, cannabis use and other attributes are significantly higher among those who died by suicide.

“Anti-social” personality disorder is marked by persistent behavior that violates the rights of others and defies all rules and norms, as well as lying, manipulation, aggression and the inability to form relationships.

The study found that of those who died by suicide, a much larger proportion suffered from personality disorders when compared with the living group.

But the study also revealed that the 120 living people they surveyed also have higher rates of mental distress than the Canadian average.

They found that 61 per cent of suicide completers had experienced major depression prior to their deaths, compared with only 24 per cent for the living comparison group.

But only eight per cent of the general population of Canada will experience major depression.

“Therefore, the rates in of major depressive disorder among Inuit in our study were higher than the national average,” the study said.

One factor that does not appear to put people at extra risk for suicide is overcrowded housing. Each of the two groups lived in equally overcrowded conditions.

“There was no significant difference between the number of people living in the suicide group and comparison groups’ households,” the study said.

However, the rapid increase in suicidal behavior in Nunavut over the past two to three decades is likely due to “a change in the intensity of social determinants.”

Those determinants include “the intergenerational transmission of historical trauma and its results (increased rates of emotional, physical, and sexual abuse, violence, substance abuse, etc.,) the study found.

And since the early 1980s, the rate of death by suicide among Nunavut Inuit aged 15 to 24 had increased six times.

The current rate of suicide death among Nunavut Inuit, 120 per 100,000 people, is about 10 times greater than Canada’s, and is almost entirely attributable to an increase in suicides among people younger than 25.

The Government of Nunavut and organizations such as Nunavut Tunngavik Inc., the RCMP, the Embrace Life Council, the Nunavut Coroner’s Office and the Canadian Institute of Health Research all backed the study money with financial and moral support.

The biggest funder was Canadian Institute of Health Research, with some money from the GN.

In each community, researchers were prepared to refer interview participants to health care professionals if they ended up in distress as a result of the interview.

The June 5 release of the study, entitled “Learning from Lives That Have Been Lived,” represents nine years of work.

“It was a long journey, a very difficult challenge to put it in place,” Chachamovich said.

But he said he hopes the work will help create better understand if suicide in Nunavut and better prevention efforts in the future.

NTI president Cathy Towtongie, who attended the launch of the study report, praised the researchers in a statement.

“It’s a tremendous work that you have done, each of you…,” Towtongie said.

Learning From Lives That Have Been Lived