The magic of ice music returns to Nunavut’s capital 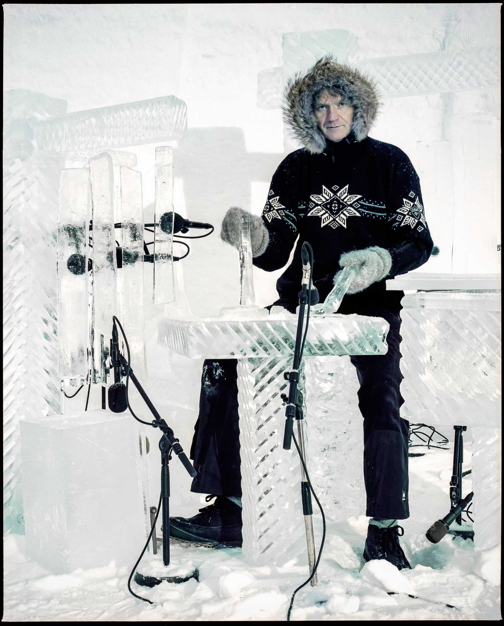 Iqalungmiut will get a chance to hear the sound of ice music again March 7 and March 8 when Terje Isungset returns to the territorial capital to perform using instruments hewn from lake water.

The Norwegian musician will showcase jazzy tracks from his recently released album, Meditations, which includes songs recorded during his first visit to Iqaluit in 2013.

“Last time it was fantastic,” Isungset told Nunatsiaq News March 3, from his home in Norway which he said is located between Oslo and Bergen. “It was so nice to be there.”

Isungset and a small crew of ice-cutters and carvers actually hew percussion and wind instruments out of local ice. The jazz musician, accompanied by singer Maria Skranes, then plays the best of them during performances.

“I hope the sound of the ice is good this year also,” he said. “We never know how it will sound.”

This year’s performances will include two horns as well as a stage full of columns and xylophone-like pieces, he said.

“I normally travel with a singer, and we will perform songs from our two most recent CDs,” Isungset said. Meditations, released last month, includes five pieces he recorded in Apex, at -38 C.

“I always improvise,” he said of his performances. “What we perform is mainly composed by me.

“We will also try to do a local song, based on the Inuit. We will take a chance,” he laughed.

Hosted and organized by Alianait Arts, this second visit from Isungset promises to be every bit as successful as his last.

Shortly after arrival, the Norwegian musician will “go straight to carving” blocks and pieces of ice harvested by local carvers in and around Iqaluit.

“We’ll work until late night and start early in the morning after,” he said. “It will be very busy indeed.”

Isungset put on his first major ice music performance in 1999 for the Lillehammer Winter Festival in Norway. He has since performed regularly at ice music festivals in Geilo, Norway, according to Alianait, and put on concerts all over the world.

Local performers will open both of Isungset’s concerts at Joamie school.

Iqaluit-based Rachel Michael and Rosalie Ann Suclan will open both concerts with popular Inuit songs. The Joamie School Choir will join them in the opening set on March 7. The Iqaluit Fiddlers will join Michael and Suclan for the opening of the March 8 concert.

Tickets for Terje Isungset’s Ice Music show are $24 in advance, $12 for youth 13 to 18, at Arctic Ventures Marketplace or online at www.alianait.ca. Admission at the door is $27, $15 for youth 13 to 18. Concerts are free for elders and kids 12 and under accompanied by an adult.