Voter turnout in Nunavut Tunngavik election a dismal 31.9 per cent 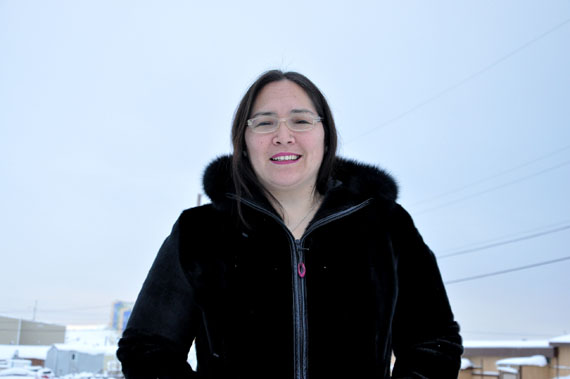 Aluki Kotierk has won the Dec. 12 election for president of Nunavut Tunngavik Inc., with 2,235 votes, or 32.1 per cent of ballots cast. (PHOTO BY THOMAS ROHNER)

Unofficial results posted online by the Nunavut Inuit organization Dec.13 show Kotierk with 2,235 votes, or 32.1 per cent of ballots cast, slightly less than one-third of the total.

That’s 243 votes more than the second-place finisher, incumbent Cathy Towtongie, who took 1,992 votes or 28.6 per cent of the total.

“I’m a little in disbelief and very emotional,” Kotierk said from her Iqaluit home moments after winning the election.

“I’ve been thinking a lot about my late grandmother and wishing she was here to witness this.”

Kotierk said she plans on focusing her presidency in the four areas that she campaigned on-—Inuit empowerment, identity, collective healing, and language and culture.

“The next four years I will focus on those areas, and any time there is an opportunity to raise Inuit up, or to address collective healing, or to talk about Inuit identity, I will take that opportunity.”

Voter turnout in the three regions ranged from 31 to 34 per cent.

The veteran bureaucrat and former CEO of NTI, Joe Kunuk, finished third with 1,737, about 25 per cent of ballots cast.

And Levinia Brown sat in fourth place, with 987 votes or 14 per cent of votes cast.

Towtongie beat Kotierk in the Kitikmeot and Kivalliq regions by a wide margin.

But vote splitting between Towtongie and other candidates kept the numbers close.

In the Qiqiqtaaluk region Kotierk won with more than 38.4 per cent of the vote, while Kunuk finished second with 33.1 per cent and Towtongie ending up with 21.7 per cent.

Nunatsiaq News reached Towtongie at her home in Rankin Inlet shortly after results were announced.

“I’m glad the campaigning was clean … I want Inuit to know we won’t have a Trump-Clinton situation here in Nunavut,” Towtongie said, referring to those calling for a recount in the recent United States presidential election.

“Let’s move forward now, there will always be other elections.”

Kotierk said many Inuit she met while campaigning in Nunavut communities touched her, especially the younger voters, some of whom wrote to her about voting for the first time.

“In Igloolik a young woman told me she would seriously consider running for public office. Moments like that made me think, yes, this is worth it, whether I get elected or not. It was affirming.”

The new NTI president will serve a four-year term.

The overall turnout figure was only 31.9 per cent, NTI said in a news release. Only 20.7 per cent of eligible voters turned out in Kugluktuk, where voting was delayed by bad weather on Dec. 12.

The full results are available here.