Only the Department of Education succeeding, Sheila Fraser says 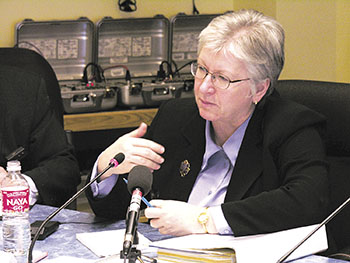 Sheila Fraser, the Auditor General of Canada, said in a report tabled today that most Government of Nunavut departments are failing to gather and analyze the information they need to develop hiring plans and fix the GN’s longstanding staff shortages. (FILE PHOTO)

Except for the Department of Education, the Government of Nunavut’s various departments and agencies do not know what they need to know to fill the GN’s numerous job vacancies and meet the Inuit employment objectives of Article 23, the Auditor General of Canada, Sheila Fraser said in a report tabled March 18 in the Nunavut legislative assembly.

“Except in the Department of Education with respect to teaching positions, the departments we examined have either not gathered or not analyzed the information that would tell them what qualifications and skills they have in their current workforce,” Fraser said.

“They also lack information on how many people they need, with what qualifications and skills, to deliver their programs and services and meet their objectives. As a result, they are unable to develop plans for filling the gaps in capacity over the short, medium, and long terms.”

Dan Shewchuk, the human resources minister, admitted that the Government of Nunavut has a long way to go in fixing its chronic staffing problems.

“I think it’s a recognition of something that’s been known for a while, and we know that we are going to have challenges in that regard to meet those targets. That’s not say that we don’t want to and we are going to try our best to do that, but right now, our present Inuit employment rate is 51 per cent,” Schewchuk told reporters.

He also said that as Nunavut’s population grows, so does the need to hire more staff, forcing the government to resort to the use of casual and contracted workers.

“I do want you to understand that as departments are growing and more staff is added, you have to realize the population of Nunavut is growing too and the services we are providing are increasing too. And yes we do have a high vacancy rate, but the reason for that high vacancy rate is because we have many positions that need skills that we don’t have people to fill right now,” he said.

The ultimate fix, Shewchuk said, is more and better training.

“I think we knew that before, that increased training is one of the needs that we really have to address, so that we can increase training and hire beneficiaries to work in Nunavut, which ultimately will increase our Inuit employment too,” Shewchuk said.

• half the GN’s job competitions fail to find qualified candidates;

• the GN will not meet its long-term goal of hiring a “representative” workforce — about 85 per cent Inuit — by 2020;

• the GN will not meet its interim goal of hiring a 56 per cent Inuit workforce by 2010;

• the Department of Education uses “good practices” that other departments could use;

• except for the Department of Education, employee performance is not evaluated;

• only a small number of local candidates have the education needed to work at certain levels of the territorial government;

• departments do not know how many people they need with specific skill-sets;

• departments do not track or analyze information about their employees, such as certificates, diplomas, licences and experience, even when the information is readily available;

• departments do not analyze why they suffer from job vacancies;

• plans aimed at increasing the hiring of beneficiaries have not met their objectives;

• training programs do not produce as many graduates as planned;

• lack of staff hampers the ability of departments to run programs.

In March 2009, when Fraser’s staff did much of their research, about 800 GN jobs sat vacant, representing 23 per cent of the work force.