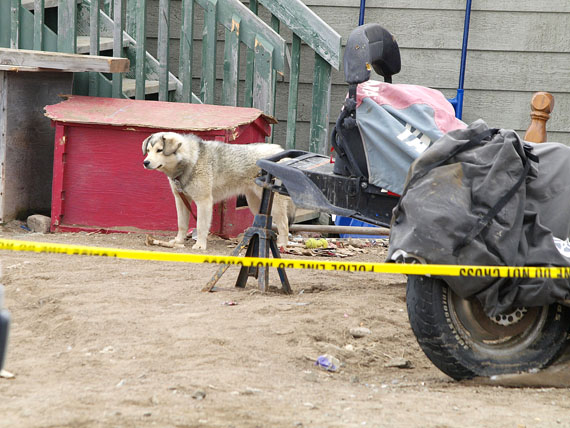 A family dog still tied up outside house 2534 in Iqaluit June 7, where police found the bodies of a woman and two children. Earlier that day, police found the body of a man in his early 40s lying on top of a grave at the cemetery. As of June 8, RCMP members in Iqaluit continued to investigate the case. (PHOTO BY CHRIS WINDEYER)

Iqaluit is reeling after four people were found dead in the city June 7.

Sylvain Degrasse and Sula Enuaraq lived together in a common-law relationship. Alexandra and Aliyah Degrasse were their children.

RCMP, responding to a call received at about 4:30 p.m., found the body of Sylvain Degrasse lying on top of a grave in the city cemetery with a shotgun nearby.The man appeared to have died from a self-inflicted gunshot to the head.

The grave site was that of his late sister, Suzanne Apak Degrasse, who died in 2007.

They later found bodies of Enuaraq and the couple’s two children in a house in the Tundra Valley neigbourhood, and say the two incidents are connected.

“We can’t jump to conclusions” about what happened, Akavak said, adding police are treating all four deaths as suspicious. RCMP say police have now informed all next of kin.

Investigators from the RCMP’s major crimes unit and forensic identification section had cordoned off two separate areas at the cemetery, one in the graveyard and one nearby, where a pickup truck and shack were blocked off with police tape.

Police also taped off House 2534 in Tundra Valley. A dog was still chained up outside the house June 7.

Akavak said police are asking anyone with information about the case to come forward, either by calling the RCMP detachment at 979-0123 or Crimestoppers at 1-800-222-8477.

In a statement, Iqaluit Mayor Madeleine Redfern urged patience while police investigate the tragedy. She called for crisis counselling for first responders, family and friends of the victims.

“This has really shaken our community. We need to come together and help each other to pull through this,” she said.

In the Legislative Assembly June 8, Premier Eva Aariak pledged the Government of Nunavut “would do everything in its power to help Nunavummiut process this tragedy in a healthy way.”

She urged people who are struggling with the tragedy to contact counsellors at Iqaluit’s social services office, the Kamatsiaqtut help line at 979-3333 or clergy. The St. Jude’s Aglican church opened its doors June 8 to offer support for the grieving.

“There are no words that can adequately describe the shock and grief that is resonating throughout Iqaluit and beyond,” Aariak said. “My heart goes out to the family and friends of those affected.”