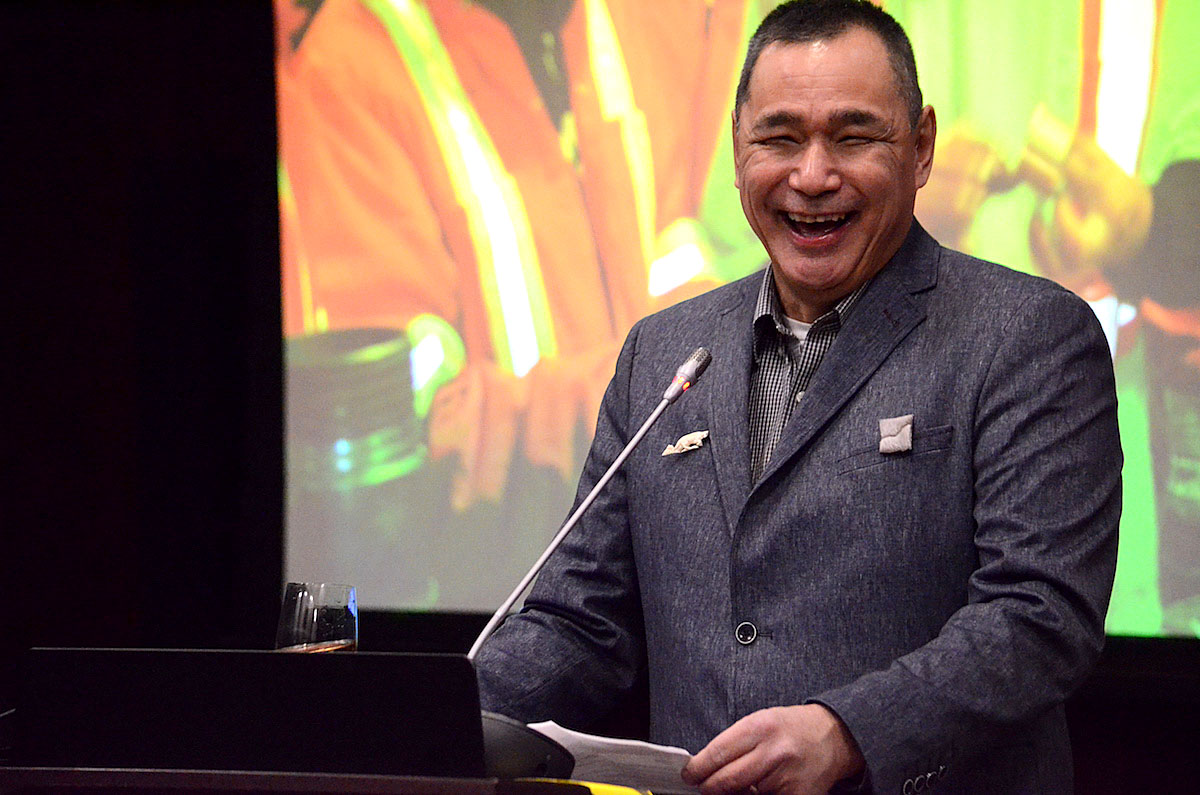 Patrick Gruben, chair of the Inuvialuit Development Corp. and chair of the new Inuit Development Corporation Association, speaks at the launch of the new association on Wednesday, Nov. 28, in Ottawa. In a news release about the new association, he said “with more global interest in the Arctic, there is a greater need for Inuit businesses to collaborate to strengthen our position in the market and to explore opportunities where we can build the critical mass to compete on larger opportunities.” (PHOTO COURTESY OF ITK)

Inuit development corporations across Inuit Nunangat have linked up to form a new association, the Inuit Development Corporation Association.

Launched yesterday at an event in Ottawa, its creation is a move that will, among other things, help position Inuit development corporations to land large and lucrative federal government contracts, such as the awarding of a new North Warning System contract.

The same corporations that make up the new association are partners in a company called Pan Arctic Inuit Logistics Corp. With a company called Atco, they formed a joint venture called Nasittuq, which won a contract to maintain the North Warning System in 2001.

But they lost it in 2014 to a company called Raytheon, despite being consulted by the federal government.

The North Warning System is financed by the governments of Canada and the United States, and may be getting an expensive upgrade soon.

Officials who stepped up on stage to praise the Inuit Development Corporation Association included Carolyn Bennett, federal minister of Crown-Indigenous Relations. Bennett said the new association would help “realize the vision and the hope of northerners”—and allow Inuit development corporations to bid on larger contracts, such as bringing telecommunications north. Master of ceremonies Clint Davis, the president and CEO of the Nunatsiavut Group of Companies, said the Inuit development corporations already collectively represent $1.2 billion in revenues, have interests in more than 100 companies and employ thousands of Inuit.

At the launch in Ottawa, Gruben told those present that the new association, which plans to work closely with Inuit Tapiriit Kanatami, will make sure Inuit businesses are not left behind in changing times.

ITK has said it also wants to see more federal money flow directly to Inuit organizations, rather than to provincial and territorial governments, like the Government of Nunavut, in its position paper on the federal government’s forthcoming Arctic Policy Framework.

Duane Smith, the current head of the Inuvialuit Regional Corp. said the association will create economic power and keep the benefits of economic development in Canada at a time when Inuit Nunangat are “on the crux of being bombarded by other countries,”

He also called “a step in a recognition of our rights.”

That was a theme also picked up on by ITK President Natan Obed, who called the new association a “really important development” because Inuit will be out in the world as developers and change the “stereotypical image” of Inuit.

Not included at the launch was any mention of the short-lived Nuvviti Corp. of Makivik, formed and then restructured less than a year later.

Makivik, which had been the only birthright Inuit organization in Canada without a separate development arm, launched Nuvviti in 2017 to help the organization separate its business affairs from its political work, and to oversee Makivik’s subsidiary companies and grow the region’s investments.

But Makivik’s president Charlie Watt said he was concerned that having a separate entity to manage Inuit-owned subsidiaries and joint ventures further removed ownership and decision-making from Nunavimmiut.

“Personally, I don’t have a strong belief in separating politics and economics,” he told Nunatsiaq News.