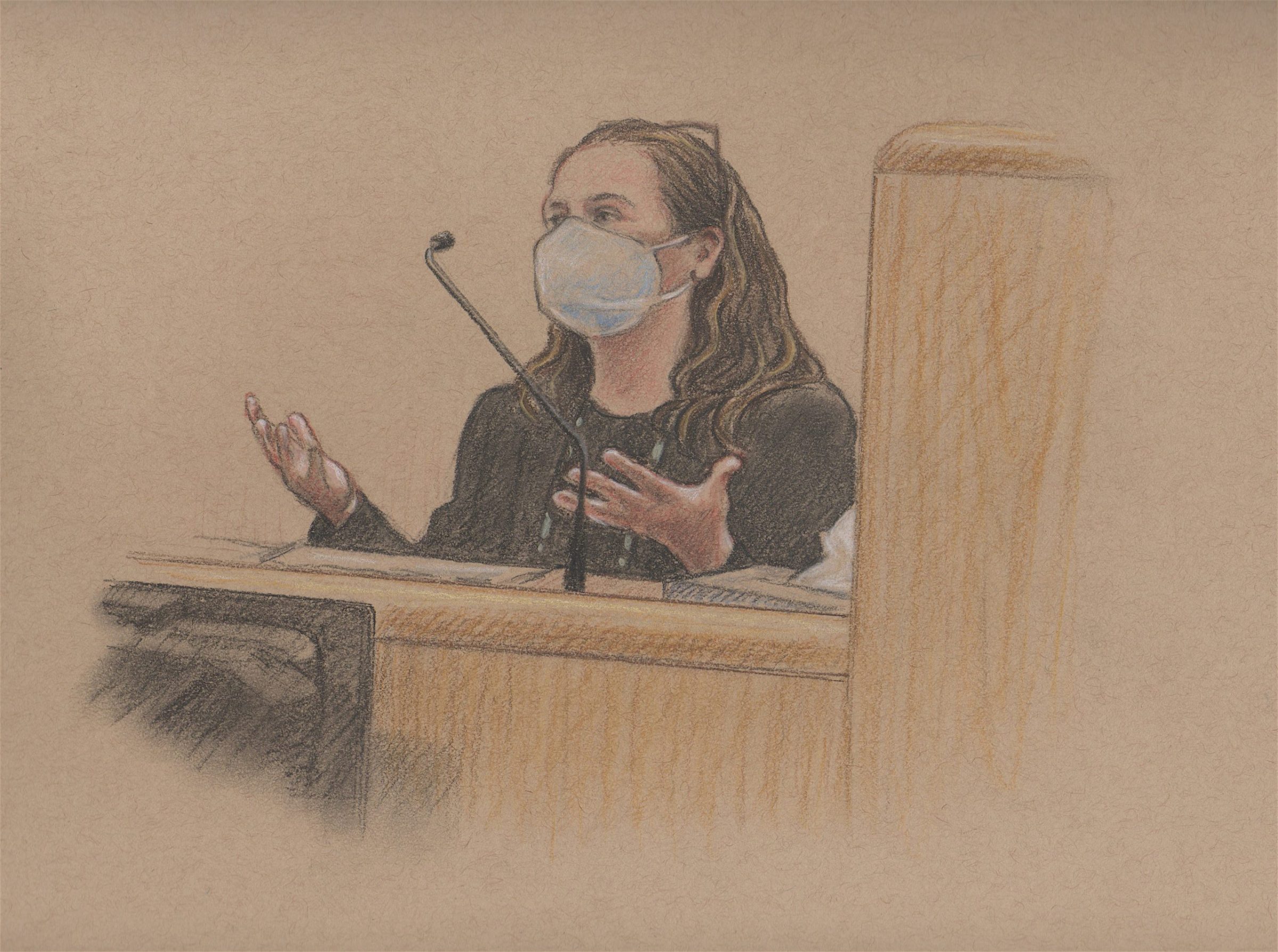 Forensic scientist Melinda Matte testifies in the witness box at the trial of Tyler Hikoalok in Ottawa on Wednesday. (Courtroom sketch by Lauren Foster-MacLeod)

Evidence found on the body of Elisabeth Salm matched the DNA profile of Tyler Hikoalok, the man accused of killing her, Hikoalok’s trial heard Wednesday.

Melinda Matte, a forensic scientist at the Centre of Forensic Sciences in Toronto who specializes in testing DNA and bodily fluids, examined evidence found on Salm, who died in Ottawa in 2018.

On May 24 of that year, Salm, a 59-year-old volunteer librarian at the Christian Science Reading Room on Laurier Avenue, was discovered there by a co-worker badly beaten and unresponsive.

She died the following day, having sustained a traumatic brain injury and 54 separate injuries.

Hikoalok, 22, originally from Cambridge Bay, has pleaded not guilty to first-degree murder.

In her testimony, Matte explained how DNA testing is used to determine the source of bodily fluids.

DNA testing can determine the biological sex of the person it came from, and whether an individual can be excluded as a match to the DNA.

Matte said DNA tests cannot determine the age, race or physical characteristics of an individual, nor can it determine when and how the DNA was deposited.

It’s possible for DNA to break down over time or be eliminated due to temperature, sunlight, moisture or if it’s washed away or cleaned.

Matte tested four swabs taken from the sexual assault forensics kit that was performed on Salm at the Ottawa Civic Hospital before she died on May 25, 2018: an external genitalia swab, an oral swab, a rectal swab and a vaginal swab.

She also tested multiple swabs taken during an autopsy conducted on Salm, including a labial swab, right and left breast swabs and samples of fingernail clippings.

The purpose of testing was to find male DNA, Matte said.

While some swabs did not show enough male DNA to warrant further testing, two suggested semen was present: the external genitalia swab from the sexual assault kit, and the labial swab from the autopsy.

When those swabs underwent further DNA testing, Matte said, a DNA profile was generated that linked Hikoalok to the samples.

She determined Hikoalok “could not be excluded as the source of the DNA” found in testing the external genitalia and labial swabs.

Matte said she told the Ottawa Police Service that Hikoalok had emerged as a match. He was arrested May 27, three days after Salm was attacked.

Matte said she did additional DNA testing on several items from Hikoalok, including the left running shoe he was wearing at the time of his arrest, which had a visible bloodstain on it.

She also tested a leather bracelet he was wearing, and swabs were taken of his left and right knuckles. A penile swab was also taken, Matte said.

The penile and knuckle swabs did not show enough DNA from an external source, but the blood found on his shoe and blood that was found through chemical testing on the bracelet matched the DNA profile of Salm, Matte said.

Dimova described seeing upwards of 100 bloodstains on carpet and furniture around where Salm was discovered, including a large one about 50 centimetres by 60 centimetres on the carpet.

The trial continues Thursday with further testimony from Matte.