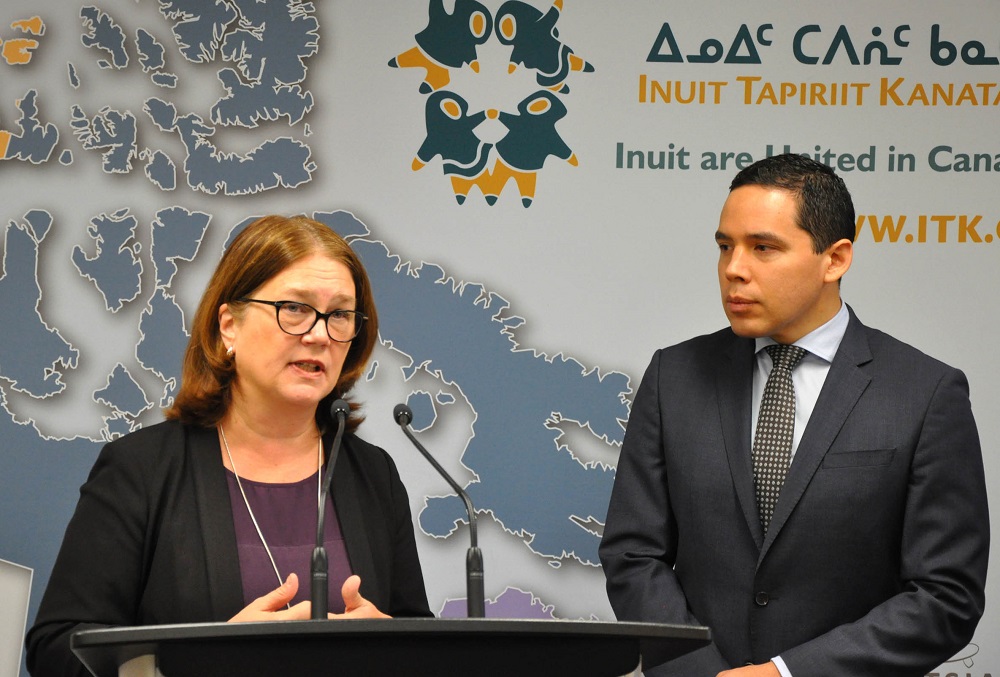 Indigenous Services Minister Jane Philpott, left, speaks alongside Inuit Tapiriit Kanatami President Natan Obed at a March news conference to announce the federal government’s pledge to eliminate tuberculosis from Inuit Nunangat by 2030. ITK has now released a framework for the elimination of the infectious disease in Inuit communities. (FILE PHOTO)

Inuit Tapiriit Kanatami has released the foundation for its plans to tackle tuberculosis across Inuit Nunangat.

The national Inuit organization launched its Inuit Tuberculosis Elimination Framework on Monday, Dec. 10, to help address the high rates of the infection in northern communities.

The release is the next step in longer-term plans to completely eliminate TB from Inuit Nunangat by 2030, a pledge the federal government made earlier this year.

The framework has six priority areas:

Those priorities will be achieved, in part, with more health-care staffing in communities, including specialized staff, cross-government commitment and Inuit-led monitoring and baseline data.

The regions have been working since last May on their own action plans, which should be released in March 2019.

In Nunavut, those efforts are being led by Nunavut Tunngavik Inc., while the Nunavik Regional Board of Health and Social Services is overseeing the process for that region.

“The framework released today is meant to be an umbrella document for those regional efforts,” explained Linette McElroy, ITK’s tuberculosis coordinator, following the Dec. 10 news conference.

“But the framework itself is not a document created by ITK. It really was community informed.”

Inuit representatives, including elders, mayors and recovered TB patients, sit on the TB task force that helped to lay this groundwork, which McElroy said is crucial to ensuring that solutions to high rates of TB infection come from the communities most affected.

Since 2017, three young Inuit have died from TB infections.

In March 2018, Ottawa committed to work with Inuit to reduce TB rates across the North by 50 per cent by 2025, and to eliminate the infection entirely by 2030.

The targets are ambitious and will be a challenge to meet, ITK acknowledges in the new document, but emphasizes a “collective responsibility” to protect future generations.

There is funding to help: $27.5 million over five years, though some argue it won’t be enough.

There is also $400 million in funding the federal government announced earlier this year to be spent over a 10-year period to support an Inuit housing plan, to help alleviate overcrowding, which has been identified as a major risk factor for tuberculosis in the North.

The strategy for that housing plan is expected to be released in the new year, ITK said.

The Government of Nunavut just wrapped up a community-wide screening clinic in Whale Cove, the results of which have yet to be made public. It was the second community screening effort of its kind in the territory this year, designed to diagnose both active and latent cases of TB.

A person with active TB may feel very tired, sweat at night and feel feverish during the day.

Someone with active TB in the chest or throat might also have a cough that does not go away after two or three weeks, chest pain, shortness of breath or bloody phlegm. Visit your local health centre if you experience those symptoms.

You can read the Inuit TB Elimination Framework here.