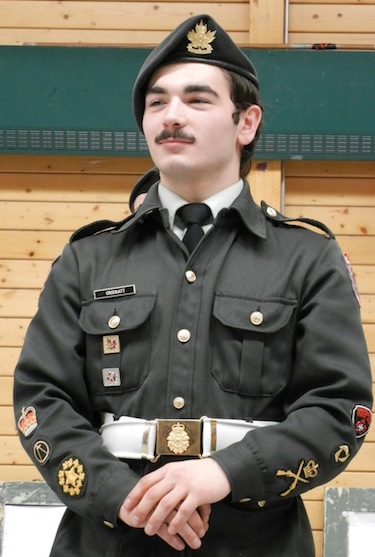 Sergeant Major Colin Crockatt of the 3004 Nanook Royal Canadian Army Cadet Corps of Cambridge Bay, shown here in his cadet uniform, is off to the Royal Military College in Kingston, Ontario next year for its Aboriginal Leadership Opportunity Year. (PHOTO BY JANE GEORGE)

CAMBRIDGE BAY — Look at Cadet Major Colin Crockatt of Cambridge Bay stand at attention or how he leads the cadets through a drill with his pace stick in hand, and you’ll feel like you’re watching soldier with his troops.

And soon, Crockatt may head off to realize his lifelong dream, to join the Canadian Armed Forces.

The program at the college, which only accepts 20 participants, is a solid stepping-stone to a future career as a soldier, something Crockatt said he’s dreamt about since a young child — and a dream that’s he’s already honoured with a large, coloured tattoo displaying the Canadian Military Coat of Arms.

When he was only 11, and still short of the usual enrolment age of 12, Crockatt joined the 3004 Nanook Royal Canadian Army Cadet Corps of Cambridge Bay. Soon he was leading the cadets in their parade drills.

To perfect the drills and those of the cadet group, he plowed through books of drills and ceremonies, earning his National Star Certification with the top mark in the North, an achievement now shown by a star-like emblem on his sleeve, one of six he’s worked for while a cadet.

Crockatt is also a top sharpshooter, having competed at national and regional competitions, winning the 2009 regional marksmanship competition. And he’s an athlete who played bantam hockey for Nunavut’s team at the 2008 Arctic Winter Games.

Today, with a rank of Master Warrant Officer and an appointment as Regimental Sergeant Major, Crockatt is the cadet group’s top officer and has picked up a number of other awards, including his recent five-year service medal.

Crockatt has also been a teacher for cadets at the annual summer camp for northern cadets in Whitehorse.

And, while a career in the military isn’’t for everyone, Crockatt embraces the discipline demanded by the military and tries to transmit this to his fellow cadets.

“I’’m the guy who makes sure there’s discipline,” he said.

Cadets perform well because they respect you, he said. That’s a skill officers in the military perfect, but which Crockatt already seems to understand and succeed at as he directs cadets in drills.

Next August, if Crockatt is accepted at the Royal Military College, he’ll head off for a recruit camp, followed by the Aboriginal Leadership Opportunity Year Program.

That program will be an” intense period of academic studies and training designed to prepare you for your acceptance into a recognized post secondary institution at years end,” its website says.

In addition to studies, participants in the Aboriginal Leadership Opportunity Year Program also learn traditions, history, rules and regulations of the college. They become involved in fitness activities to increase physical fitness and to develop teamwork. 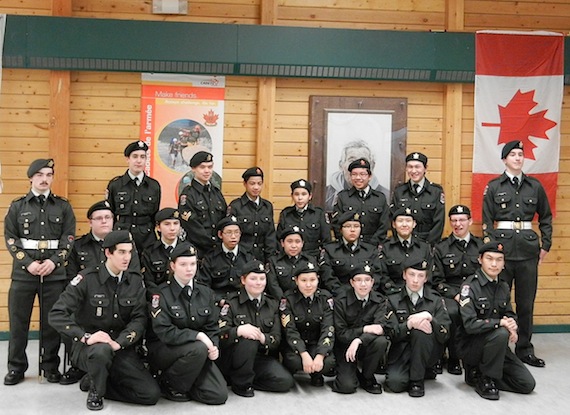