“A problem that is also affecting fish, bears and other species” 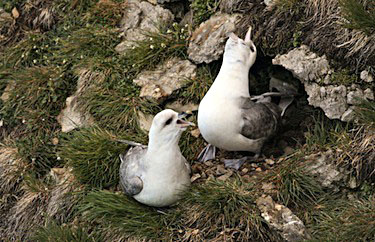 Northern Fulmars, shown here greeting each other on a nest on a rocky cliff at a breeding colony in Nunavut, are swallowing more and more wayward plastics. (PHOTO BY MARK MALLORY/CWS)

When biologist Jennifer Provencher headed to the Arctic, she signed on to help assess how seabird diets are changing as temperatures climb in the North.

She never expected to find plastics on the menu. But she and her colleagues at the Canadian Wildlife Service are pulling remarkable amounts of trash from birds in some of the remotest spots on Earth.

Fulmars are strong flyers that skim the surface swallowing tasty tidbits, and 84 per cent of the ones the researchers examined from two Arctic colonies had plastics in their guts.

One had swallowed the mangled remains of a red bottle lid, with a striking resemblance to a Coke cap, along with 20 other bits of plastic.

“It’s hard to believe a bird could have that much plastic,” said Provencher, who has been combing through the stomach contents for her graduate work at the University of Victoria. “That’s the equivalent of a human being having a baseball-sized chunk of plastic in your stomach.”

Even more “shocking,” she said, is the fact that 11 per cent of thick-billed murres from five Arctic breeding colonies had plastics in their guts when examined — the first evidence of trash in an “auk” species in Canada’s Arctic.

“We are so concerned about the melting ice,” said Provencher. “Yet one of the consequences of melting ice is more shipping and more tourism and that is directly impacting the wildlife through plastics ingestion.

“It’s not just birds… They are just the indicator of a problem that is also affecting fish, bears and other species.”

Vast amounts of plastic have been collecting in the world’s oceans for the last 50 years. Bottles, bags and other plastic trash are carried off on currents, and can keep travelling for years, breaking down into smaller and smaller pieces.

There are the obvious threats to sealife of entanglement and blockages — albatrosses have been known to swallow toothbrushes and plastic toys. And scientists are increasingly concerned about subtle effects, including reduced appetite, stunted growth and exposure to pollutants that can leach out of plastics.

The United Nations Environment Programme warned Feb. 17 that marine plastics, and the “micro-plastics” generated as plastic is broken down by wave action and sunlight, could be “a new toxic time bomb.”

None of this is good for seabirds, which in the case of Canada’s Arctic are already under pressure due to dramatic changes underway in their ecosystem.

The Canadian Wildlife Service team, led by Anthony Gaston at Environment Canada, has found Arctic cod, long a mainstay of the diet of arctic seabirds and their chicks, is being replaced with less nourishing capelin and sandlace that are moving north as the ice retreats — along with an increasing amount of plastic.

The biologists are gauging the birds’ health at Arctic breeding colonies, where they climb over rocks and cliffs to weigh and tag adults and their chicks. At the end of the last four field seasons Provencher headed back to B.C. with dozens of frozen stomachs.

“When I open up the gut, I find these plastic pieces packed up around the bottom of the stomach and around the sphincter that leads into the intestine,” said Provencher.

She has an intriguing collection of glass jars, with white, grey, brown, red and even fluorescent plastic bits she’s found inside the birds. There are industrial pellets and “nurdles” that fell into the ocean on the way to and from plastic factories, and an array of odd-shaped fragments that are hard to identify.

No one knows how much plastic is in the oceans, but the United Nations Environment Programme said there is “an urgent need” to better monitor its fate and impact on marine ecosystems.

Plastics do not just float around the ocean but are sinking and piling up on the seabed. “Plastic debris has been observed on the ocean floor from the depths of the Fram Strait in the North Atlantic to deepwater canyons off the Mediterranean coast,” UNEP reports.

Canada, unlike Europe, does not have a co-ordinated program to deal with marine debris, but the birds in the Arctic and those washing ashore on the west coast point to a growing problem.

“My numbers are approaching those seen in the North Sea,” said biologist Stephanie Avery-Gomm, who looked at the stomachs of 36 fulmars that washed up on Vancouver Island after a storm and were picked up by volunteers with Bird Studies Canada.

One of the fulmars contained several dozen pieces of plastic, including industrial pellets, a chunk of sponge, fishing line and a bristle from a hairbrush.

“Plastics do really last forever,” said Avery-Gomm, who is doing graduate work at the University of B.C. She is so concerned about plastic pollution she opens up and examines seabird stomachs in her spare time.

Fulmars, a petrel found throughout the Northern Hemisphere, are surface feeders often enticed by floating plastics. They’ve been described as “flying dustbins,” though scientists prefer to call them “sentinels” that reflect the amount of trash in the marine environment.

Canada’s Arctic was still living up to its “pristine” reputation in the 1970s, when a study of 181 fulmars turned up no plastic, the CWS team reports. But seabirds now indicate plastics are embedded in the Arctic ecosystem.

Canadian Wildlife Service biologist Mark Mallory collected 144 fulmars in the Arctic between 2003 and 2006 and found more than 30 per cent carried plastic. More recently Mallory, Provencher and their colleagues collected another 25 fulmars at a High Arctic colony and another on eastern Baffin Island.

Provencher pulled plastic out of 21 of the 25 birds, or 84 per cent, which is approaching the incidence seen in the much more industrialized North Sea where 95 to 100 per cent of the fulmars carry plastic.

Since Mallory had found plastic in Arctic fulmars before, Provencher said they weren’t all that surprised to find plastic in the birds again. “The surprising thing was the number of birds that had plastics in them,” she said.

“But what was shocking was to open up the murres and find plastics,” she said noting that she found it in 11 per cent of the 186 thick-billed murres she slit open for their most recent study.

Penguin-like murres are not “trash-eaters,” said Provencher. They dive down to feed below the surface, which, judging by the birds’ stomachs, is now home to increasing amount of plastic.

Most of the plastics were too weathered to identify, but one murre had swallowed a fluorescent yellow ball about the size of pea. It turned out to be pellet for a toy air gun that somehow ended up in northern Hudson Bay, said Provencher, who found between one and nine pieces of plastic in the murres. Toe fulmars carried much more, with an average of 5.5 pieces per bird — one had 21 pieces.

It is not known how long plastic stays inside seabirds, but Provencher suspects most of it eventually passes through and back into the ecosystem where it can be picked up by other creatures.

The murres examined were taken from five colonies, with the most plastic found in birds from Akapotok Island, south of Baffin Island, and the lowest amount in birds from the colony on Prince Leopold Island in the High Arctic.

The biologists reported recently in the Marine Pollution Bulletin that finding plastic in the birds “suggest(s) that this is a widespread occurrence amount thick-billed murres in Canada.”

“The murres sampled earlier in the year have way more plastic — so they are potentially bringing them from the North Atlantic where they winter,” said Provencher. “But we also find them in August with plastics so they are eating them locally (in the Arctic) as well.”

“It’s a mixed bag, and we won’t know more till we do more research,” said Provencher.

The Save the North Sea project, involving seven European countries, has set acceptable limits for plastic ingestion by birds and has an aggressive program to reduce and monitor marine litter by checking fulmar stomachs.

“No one is doing it for Canadian waters, but every time we sample we are surprised by the amount of plastics we find,” said Provencher, who has just returned form Europe where she met with scientists standardizing techniques for assessing birds and their plastic loads. Studies show that fulmars in European waters are loaded with an average of 40 pieces of plastic.

While birds in the Arctic contain much less plastic, the Canadian Wildlife Service team notes that 28 per cent the fulmars from the Arctic colonies exceeded the level now deemed acceptable in Europe.

Provencher said a concerted effort is needed to prevent the number from going higher.

“Everyone is talking about Arctic sovereignty, and increasing shipping and energy and mineral development,” said Provencher, who is about to begin her PhD at Carleton University in Ottawa. “It’s time we also started monitoring plastic pollution in Arctic water, and building the infrastructure for proper garbage disposal and recycling.”