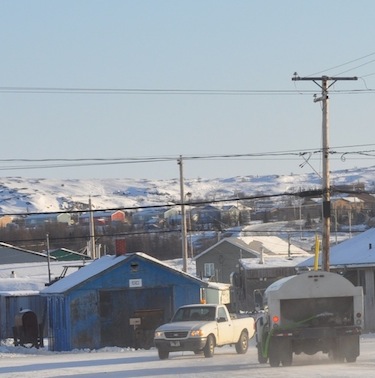 A new Nunavik-based driver training program will train 300 drivers a year in Kuujjuaq, shown here, and Inujuak and provide them with a standard Quebec license. (PHOTO BY SARAH ROGERS)

KUUJJUAQ – Administrators of a new driver training program in Nunavik say safer roads and fewer accidents across the region lie ahead.

Once a driver training program begins to fan out across the region’s schools this fall, Nunavik drivers will start to qualify for the same driving license held by other residents of Quebec.

The Kativik Regional Government’s employment and training department has teamed up with the Kativik School Board to develop a class 5 driver’s course, to be offered in Kuujjuaq and Inukjuak next September.

Currently, Quebec law requires car or pick-up truck drivers across the province to hold a class 5 driver’s license — except in remote places like Nunavik

But job requirements and safety issues have prompted requests for a Nunavik-based program, Margaret Gauvin, director of the KRG’s department of employment, training, income security and child care, said this past week at the Kativik Regional Government council meeting in Kuujjuaq.

“Many jobs now require (a class 5 driver’s license), whether it’s the local municipality or a mining site,” Gauvin said. “The new license will also allow the person to drive when they’re outside of Nunavik.”

And when more Nunavimmiut have their license, she predicts safer roads and fewer accidents.

The duration of the course will be 52 weeks — based on SAAQ standards — and will include a mixture of in-class and practical training.

After the training is completed, students can take a driving test administered by SAAQ.

While the program is offered to adults across the region, those who need a license for work will get higher priority for entrance into the course, Gauvin said.

After the program’s initial launch in Kuujjuaq and Inukjuak, training will gradually be made available in other communities. While that happens, road signs and markers will be adapted.

“We’re hoping that once it gets underway, that we’ll be able to train 300 drivers a year,” Gauvin said.

The territorial license will stay in place until the new training program takes root.

As a public program paid for by tax-payers, Parsons said it’s about time Nunavimmiut can benefit from the SAAQ services.

“We live in Quebec too and we’d like to see them eventually establish an office here,” he said.