Food safety and security is the number one issue that Inuit want to see addressed by the Arctic Council’s member nations, said Duane Smith, president of Canada’s Inuit Circumpolar Council, May 5 to a conference on Arctic climate change and pollution in Copenhagen. (PHOTO BY JANE GEORGE) 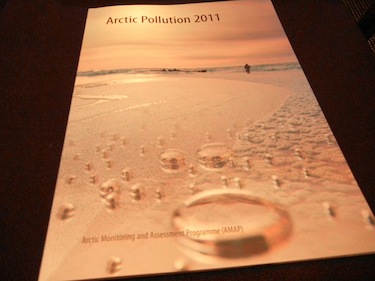 The world needs to act now to reduce poisonous mercury emissions, says report called “Arctic Pollution 2011,” produced by the Arctic Monitoring and Assessment Program and released May 6 in Copenhagen.

COPENHAGEN — When Duane Smith, president of Canada’s Inuit Circumpolar Council, had his hair tested for mercury, the results showed higher than recommended levels.

That put him in the same situation as many Inuit in Nunavut and Nunavik, where studies have shown a similarly high presence of toxic mercury, Smith told participants at this week’s international conference on climate change and pollution in Copenhagen.

A “legally-binding global agreement” is needed to control mercury emissions in the Arctic, says a new assessment on mercury, Arctic Pollution 2011, released by the Arctic Monitoring and Assessment Program at the conference on May 6.

But it’s not clear how quickly the report’s call for an agreement to control mercury emissions will move ahead at the Arctic Council ministerial meeting next week in Nuuk.

The AMAP report on mercury and another recently-released report on Arctic climate change are only slated to be discussed at an informal ministerial roundtable on “The Changing Arctic: Challenges for the Arctic Council.”

There, ministers from the Arctic Council’s eight members — Canada, the United States, Russia, Denmark, Iceland, Norway, Sweden and Finland, and permanent participants like the ICC, will be “invited to address key challenges and priorities for the Arctic Council as a consequence of the changing Arctic,” a top Danish official told Nunatsiaq News.

But without quick, international action, levels of mercury in the Arctic will rise by 25 per cent by 2020, say the 44 authors of Arctic Pollution 2011.

If nothing is done to control mercury, there will be a steep cost world-wide of $3.7 billion a year due to the lower IQ “associated with mercury exposure,” they say.

“It is clear that tackling mercury pollution is not only beneficial for the environment, but also makes sound economic sense,” the report’s authors say.

Almost all mercury found in Arctic marine mammals, seabirds and freshwater fish comes from industry far to the south, mainly from metal and cement production in east Asia.

Most is carried north by winds, ocean currents and rivers.

In the Arctic, mercury undergoes a process in the water, and turns into deadly methyl mercury.

This mercury accumulates in marine life, with serious implications for people who eat a diet rich in seal and whale, marine mammals which build up high levels of mercury.

Mercury “concentrations in some Arctic animals (including top predators) are still increasing,” says the report’s authors.

Depending on their level of mercury exposure, the effects of mercury on people include a lower IQ, delays in walking and talking, lack of coordination, blindness and seizures, says Health Canada.

And climate change is expected to pour more mercury into the Arctic environment though thawing permafrost, melting ice and snow and increased flows in rivers.

Less sea ice cover may also lead to changes in what the diet of polar bears and seals, leading them to take in more mercury.

As well, a higher ocean temperature of 1 C may multiply that toxic methyl mercury in some whales and cod.

Some Inuit women of child-bearing age in Canada and Greenland who consume marine mammals have mercury levels between three and 10 times higher than people in other areas of the Arctic who rely on store-bought food.

The report’s authors also mention a study on Inuit pre-school children which found two in three eat foods loaded with too much mercury.

Smith told scientists at the Copenhagen conference that pollution in the Arctic food chain from contaminants like mercury presents impossible food choices for Inuit because eating country foods is ”who we are are.”

Although there have been bans on eating foods affected by mercury and other pollutants in places like the Faroe Islands, these bans can’t work in northern Canada where there are not as many alternatives to buy more healthy food, said a Health Canada speaker at the conference.

In any event, the Arctic Pollution 2011 report’s authors say dietary changes are only a “short-term solution”

The longer term solution is take actions which will reduce the presence of mercury in the Arctic.