For Grise Fiord’s exiles, an apology that came too late 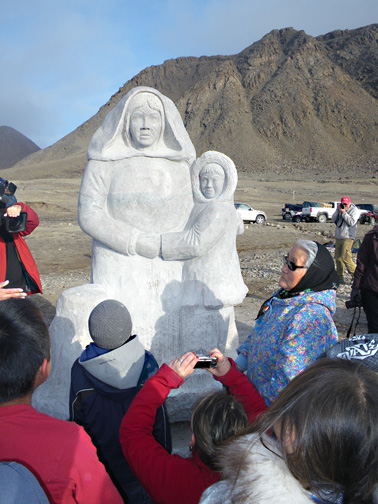 Rynee Flaherty, right, the eldest survivor of the Grise Fiord exiles, examines the monument to the high Arctic relocation as it’s unveiled Sept. 10. It took Grise Fiord carver Looty Pijamini 10 months of work over two years to cut the monument out of solid Ellesmere Island granite. (PHOTO BY GABRIEL ZARATE)

GRISE FIORD — Larry Audlaluk wasn’t even three years old when he first saw the narrow stretch of land below high, imposing cliffs — prone to rockslides — that would become home.

“There were times when my mother used to be very sad,” Audlaluk said as he recalled the hazy memories of his early childhood in Grise Fiord. “It was difficult to remember her listening to all the promises that were broken.”

The mood was somber but hopeful on Sept. 10 in Canada’s most northerly community, today home to about 150 people, as representatives of Inuit organations and the federal government unveiled the second of two monuments to the High Arctic Exiles, this one made by carver Looty Pijamini.

Audlaluk has spent much of his adult life lobbying for national recognition of the High Arctic relocation, a quest that culminated in the establishment of permanent monuments in Grise Fiord and Resolute, and an official apology from the federal government this past August.

“I hope this will start a new era of life here,” he said.

But the apology came too late for those who most needed to hear it: the original exiles, lured by the federal government from Inukjuak in the mid-1950s.

“The people that were are thinking about right now are not with us, they are in the ground right now, resting,” said Grise Fiord’s mayor, Meeka Kiguktak, speaking in Inuktitut. “It would have been better if it had been done 10, 20 years ago,” she said in a later interview.

After more than 50 years only two of the original exiles still live in Grise Fiord. The rest have either moved away or died. Grise Fiord resident Jaypetee Akeeagok said he could accept the apology for himself, but not for his family who suffered before he was born during the early days of the community.

“Too late,” Akeeagok said. “It took too long for them to recognize us.”

It may have been the largest gathering of guests in the remote community’s history. Three airplanes were parked on the tiny airport’s tarmac, one of which had made two trips from Resolute. The number of dignitaries nearly matched the number of exiles and their families.

For the third time, Indian and Northern Affairs Minister John Duncan read the federal government’s official apology to the recolatees, following the initial announcement in Inukuak in August and Resolute on Sept. 8.

“Despite the suffering and hardship, the relocatees and their descendants were successful in building vibrant communities in Grise Fiord and Resolute Bay,” Duncan said. “The Government of Canada recognizes that these communities have contributed to a strong Canadian presence in the High Arctic.”

But mayor Kiguktak said the government still owes more to the communities of the High Arctic.

Duncan could not answer the question of whether the 1950s Canadian government established the two communities with sovereignty in mind. But he acknowledged “there’s no doubt that their presence contributed to sovereignty.”

“Governments made decisions then that people just had no way to deal with,” Duncan said. “Canada, any democratic country, could not do that these days. Things were definitely different and so it’s hard to say what motivated everything at that time.”