“This is a chapter that Makivik can close” 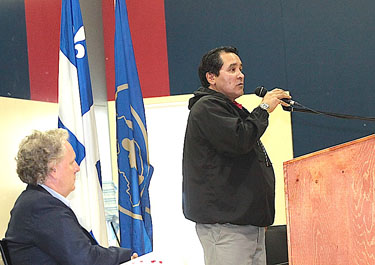 Quebec premier Jean Charest listens to Makivik Corp. president Pita Aatami on Aug. 8 in Kangiqsulajjuaq when Quebec announced it would give Makivik $3 million to acknowledge the slaughter of Inuit sled dogs in the 1950s and 60s. (PHOTO COURTESY OF MAKIVIK CORP.)

Three million dollars in compensation from the Quebec government will go directly to Nunavimmiut who lost their dogs teams as part of the killings of sled dogs which took place in the 1950s and 60s.

Makivik plans to work with elders to come up with an inventory of dog owners who lost their dogs between 1950 and 1970 when provincial and federal policies saw many dogs killed in the region.

Aatami estimates the $3 million will be divided among a “few hundred” recipients.

Quebec premier Jean Charest and his native affairs minister Geoff Kelley travelled to Kangiqsualujjuaq Aug. 8 to sign an agreement recognizing the dog slaughters that took place in Nunavik and their impact on the Inuit culture and way of life.

The agreement included $3 million for Makivik and commemorative plaques for each Nunavik community.

Aatami, who has been lobbying Quebec to recognize its role in the dog slaughters for more than 10 years, called the event “a bittersweet moment.”

“It took us 12 years for the government to apologize,” he said. “This is a chapter that Makivik can close, but for the people who had their dogs killed, the loss was huge.”

Aatami said money can never replace what those Inuit lost, nor can it fix the problems that were created when families lost their only mode of transportation.

But the compensation will help, he said.

Aatami said Quebec’s recognition of the pain caused by past policies should be an example to Inuit in other regions who suffered similar losses.

“Because not only Nunavik suffered, but also Nunavut,” he said. “I hope it will help the federal government take notice. Even after all these years, an apology can still come.”

Aatami credited Charest for having the courage to apologize.

And to show his appreciation, Aatami took Charest on a fishing trip to Kangirsuk this past week.