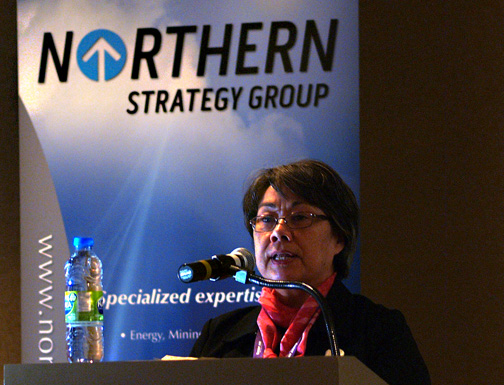 Nunavut can move from being a have-not to a have territory, Premier Eva Aariak says, but only if governments, Inuit organizations and the private sector work together to close the territory’s massive infrastructure gap.

Aariak made the pitch for a familiar list of infrastructure demands, and said the current lack of harbours and roads is constraining Nunavut’s efforts to grow its economy.

The existence of only one harbour, in Pangnirtung, curtails growth in the fishery sector and forces the fishing industry to process most of its catch outside the territory, she said.

Meanwhile, completion of the Bathurst Inlet Road and Port (BIPAR) project would open up the Kitikmeot region for mineral development, the premier said, while construction of a road connecting the Kivalliq region with Manitoba would allow year-round transport of goods and the possibility of connecting with the North American hydro grid.

This kind of basic infratstructure, Aariak said, is what allowed southern Canada to grow into a prosperous, modern industrial economy.

“Until Canada can provide the North with the strategic infrastructure enjoyed by the rest of the country, we will continue to be the forgotten coast,” she said.

The private sector is joining the chorus calling for better infrastructure to boost economic growth and lower the cost of living.

Larry Connell, the regional manager of Agnico-Eagle, which owns the Meadowbank gold mine near Baker Lake, said Nunavut’s sky-high cost of transportation means only the highest-grade mining projects can be profitable.

Connell said 25 per cent of Meadowbank’s operating costs go to transportation, including the regular movement of more than 200 workers between the mine site, various Kivalliq communities and the south. “We built our own infrastructure,” he said. “We had to.”

Government infrastructure spending should focus on lowering the cost of living, Connell said, to the benefit of both Nunavummiut and the private sector. That infrastructure should include airport improvements to allow the use of more efficient modern aircraft, and a deepwater port in each of Nunavut’s three regions.

“If we can lower our operating costs we can turn waste rock into ore.” Connell said that would help extend the life of a mine, and in turn boost government tax revenue.

But the question remains: how does cash-strapped and debt-capped Nunavut pay for all this? A possible solution may be to tap into the trillions of dollars of financing available in global equity markets.

“All you need is a little microscopic sliver of that stuff,” said Scott Northey, an independent investment banker.

But even that may prove difficult for Nunavut, which has between $50 million and $75 million left under its $200-million debt cap, and still has to account for as much as $50 million worth of cost overruns from the Affordable Housing Initiative.

And with the federal government already warning it plans to curb spending in order to tackle a massive deficit, Nunavut may have to turn to public-private partnerships to finance big-ticket infrastructure.

The problem, according to Northey, is that Nunavut lacks a credit rating, and many of its infrastructure projects probably can’t be counted on to provide revenue streams that would be appealing to private investors.

However, the federal government recently set up a Crown corporation called P3 Canada to nurture potential partnerships on infrastructure projects by providing up to 25 per cent of construction costs on transport, energy, tourism and solid waste projects.

Dale Booth, a senior advisor with P3 Canada, said the Crown corporation is inviting submissions for a third round of projects in 2011. Round 2, which closed this past June, is expected to dole out between $200 million and $300 million.

Aariak said her government is open to partnerships, but clearly expects the federal government to pony up large amounts of money to fund infrastructure.

“The hard reality is that building the North will ultimately take more money than any one government, organization or private business can offer,” she said.