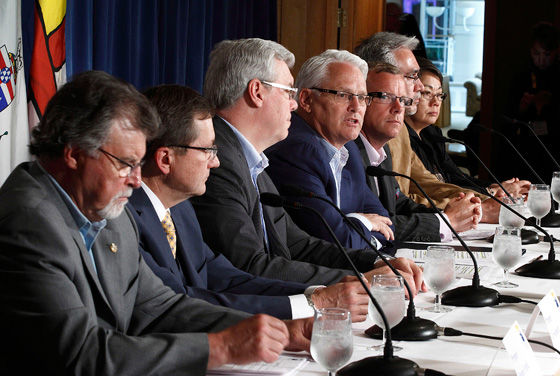 “We have been trying to foster this idea of connections with Greenland,” Aariak said from Vancouver, after the annual Western Premiers Conference wrapped up June 16. “It’s good to get support from other jurisdictions in that area.”

Aariak said the push to resume flights between Iqaluit and Nuuk will be on the agenda when she meets with Greenland premier Kuupik Kleist later this month.

Open skies agreements reduce regulations on routes, fares and capacity for air travel between countries. In a declaration, premiers of the four western provinces and three territories said signing more open skies pacts, especially with Asian countries, would serve as a boost to western economies.

“Canada depends for its prosperity on its ability to reach out to world markets, and seize new opportunities wherever they may exist,” the declaration states. “Open transportation links are therefore essential to Canadians’ prosperity and quality of life.”

Open skies agreements also allow foreign airlines to operate inside other countries, which worries some airline observers who say Canada can barely support one major airline — Air Canada — as it is.

The premiers also called for increased investment in aboriginal training and education. “Increased Aboriginal graduation rates and greater participation in advanced education will lead to positive results for all Canadians,” read a statement signed by all seven premiers.

“It illustrates the fact that education and training and skills development are of the utmost importance to everyone,” she said.

But Nunavut produces nearly no energy of its own, and instead relies almost entirely on imports of diesel for power generation. That, Aariak said, is a sign Nunavut needs to do more research and development on ways to generate alternative energy in the Arctic.

Aariak also said she plans to meet with Manitoba Premier Greg Selinger in the coming months for talks that would include proposals for highway and power line connections between that province and the Kivalliq.

With a report from Canwest News Service