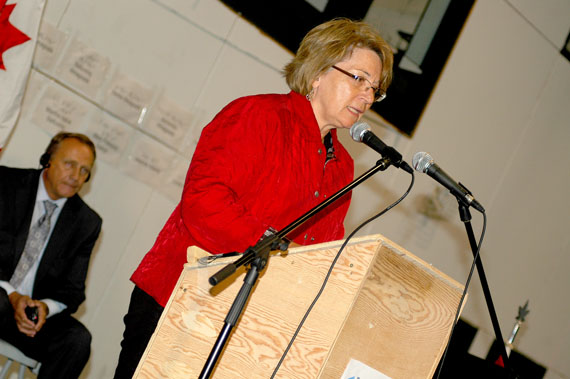 ITK president Mary Simon responding to the federal government’s apology to the High Arctic Exiles in Inukjuak on Aug. 18. John Duncan, the new minister of Indian affairs and northern development, is seated behind her with his hands folded over an interpretation headset. (PHOTO COURTESY OF PATRICIA D’SOUZA, ITK) 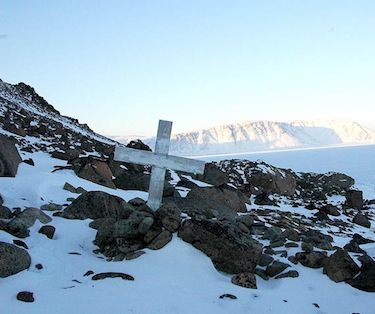 Many of the original relocatees to Ellesmere Island have now passed away. Their names were read Aug. 18 in Inukjuak following the delivery of the official apology by INAC minister John Duncan. (PHOTO COURTESY OF NTI, BY FRANCO BUSCEMI) 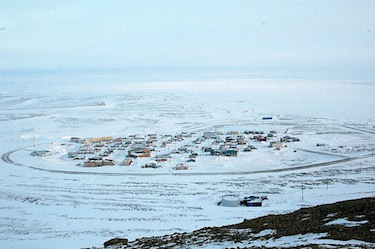 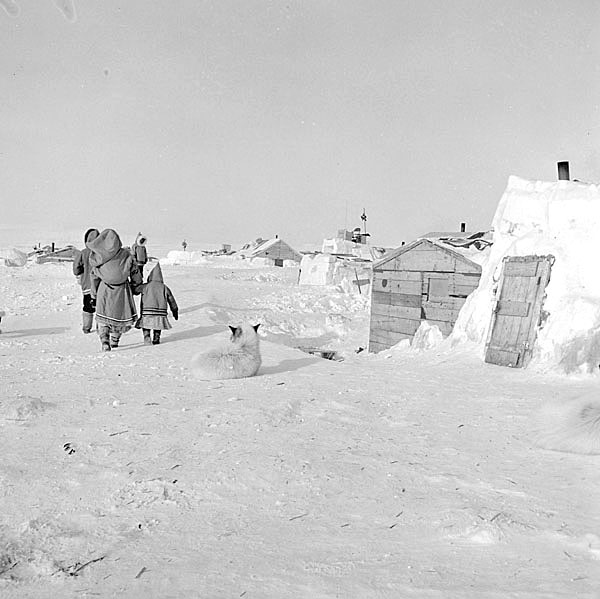 More than 14 years after Ron Irwin, then the minister of Indian affairs and northern development, settled financially with the High Arctic exiles on behalf of Canada, the survivors and descendants of the 19 Inuit families who were moved to Resolute Bay in 1953 and to Grise Fiord in 1955 received a measure of emotional satisfaction Aug. 18.

In Inukjuak, the original home of most of the relocatees, John Duncan, the new minister of INAC, offered what Irwin didn’t: an official apology from Canada.

“On behalf of the Government of Canada and all Canadians, we would like to offer a full and sincere apology to Inuit for the relocation of families from Inukjuak and Pond Inlet to Grise Fiord and Resolute Bay during the 1950s,” Duncan said in a speech.

“We would like to express our deepest sorrow for the extreme hardship and suffering caused by the relocation. The families were separated from their home communities and extended families by more than a thousand kilometres. They were not provided with adequate shelter and supplies. They were not properly informed of how far away and how different from Inukjuak their new homes would be, and they were not aware that they would be separated into two communities once they arrived in the High Arctic. Moreover, the government failed to act on its promise to return anyone that did not wish to stay in the High Arctic to their old homes.”

“Today’s events are a step in the right direction,” Simon said to those gathered.

At a news conference in Inukjuak, shortly after delivering the apology, Duncan admitted that there were a string of broken promises made to the families moved north from what was then the settlement of Port Harrison.

“Mistakes were made in the 1950s,” Duncan said, adding that “the government has no way to determine what the government of the day was motivated by when they made this relocation.”

Acknowledging that federal officials told the relocatees were they going to a “more abundant place,” promised that they would remain in one communities and that they could leave and return to their home communities after two years if they were unhappy, Duncan said the federal government is “sorry for the hardship, the suffering and the relocation having taken place.”

“Those are significant promises, and we’re apologizing for the relocation itself. We feel it was an inappropriate thing to do to move them from their ancestral lands, at least on those kinds of promises,” he said.

On the positive, residents of Grise Fiord and Resolute Bay are now proud of their communities, Duncan said — and then he made another promise: to “do is do everything we can to ensure that they can share Canada they way other Canadians do.”

The apology is “the first of a series” of events that will include ceremonies in Grise Fiord and Resolute Bay next month to unveil memorials to the relocatees, a work by Simeonie Amagoalik in Resolute Bay on Sept. 8 and another by Looty Pijamini in Grise Fiord on Sept. 10.

Today, only 34 of the original group are still alive. But they left numerous descendants now living throughout Nunavut, Nunavik and southern Canada.

In 1996, when Irwin made no apology in Inukjuak at Makivik Corp.’s annual general meeting that year, many exiles and their descendants were disappointed.

A report done by the Royal Commission on Aboriginal Peoples had found that the federal government’s actions at the time of the relocation were “coercive” and done without the consent of the Inuit.

In 1996, Larry Audlaluk of Grise Fiord and Markoosi Patsauq of Inukjuak, members of the original families, told Nunatsiaq News that the agreement reached with the federal government was a “take it or leave it” deal, and that they, like many of the exiles, accepted it because elders wanted to see some positive outcome from the years of telling their story — although they were upset that it did not include an apology.

Patsauq said in an Aug. 18 email comment to www.nunatsiaqonline.ca that he accepts the apology made in Inukjuak.

“This historic event is written in our heart. God bless Canada,” Patsauq said.

“Today’s apology brings some relief to the surviving Inuit who were forcibly relocated, and to the family and community members who struggled with the intergenerational effects this terrible experience caused,” NTI’s Kaludjak said in a news release.

Nunavut premier Eva Aariak called Aug. 18 an “historic day for Inuit of the High Arctic, northern Quebec, and indeed for all Canadians.”

“It is my great hope that these long-awaited words from the federal government will help to heal the pain still felt by so many. My thoughts are with them, their families, and those who are no longer with us today to hear these words of apology,” Aariak said in a statement.

The QIA’s Eegeesiak urged Harper to attend the memorial unveilings scheduled for next month and develop a broader view of sovereignty.

“The Prime Minister has shown strong leadership in asserting Canadian sovereignty through the military and scientific research,” she said in an Aug. 19 statement. “Now it is time to finally recognize the tremendous role played by Inuit in asserting Canadian sovereignty, and put a difficult chapter in Canadian history behind us. Let us move forward based on the principle that sovereignty is based on socio‐economic and cultural development and well‐being.”

The Aug. 18 apology came with no money attached because the issue of compensation was settled in 1996 when Ottawa agreed in a “reconciliation” deal to pay $10 million in compensation for the suffering caused after the relocation of the Inuit families.

The High Arctic Relocatees Trust, or “HART fund,” then stood at $10 million, when the federal government turned it over to a six-person Makivik-appointed board of trustees, but its value had dwindled as of Dec. 31, 2009.

In 1996 and 1997, the trustees took $2 million of it to distribute in equal amounts to the original High Arctic exiles, leaving $8 million invested to produce earnings for future cash distributions.

A financial statement acquired by Nunatsiaq News earlier this year showed the fund was valued at only $8 million as of Dec. 31, 2009, and that because of current market conditions, the trust was not able to generate enough income to pay administrative expenses and produce payments to beneficiaries, especially to the aging group of “original” High Arctic Exiles.

In Inukjuak, Duncan praised Makivik’s management of the trust.

“The trust fund is well managed by Makivik along with everything else they manage. They seem to be very professional, so we believe it’s in good hands,” he said.