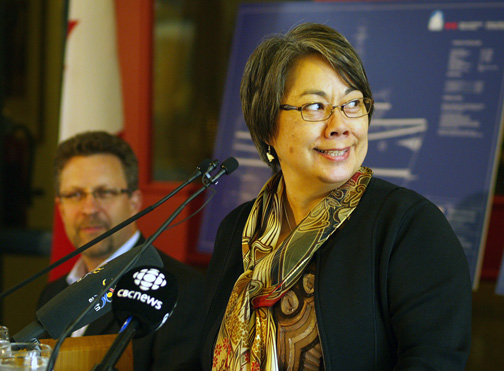 Premier Eva Aariak speaks to reporters during a news conference in Iqaluit May 20, 2010, as Chuck Strahl, the Indian and Northern Affairs minister, looks on. The federal government announced it’s spending an additional $320,000 to get Nunavut’s new $1.9-million research vessel ready. (PHOTO BY CHRIS WINDEYER)

Nunavut’s Arctic research vessel will hit the high seas in 2011, even if it still lacks a name and a home port.

Chuck Strahl, the Indian and Northern Affairs minister, was in Iqaluit May 20 to announce $320,000 in funding to outfit the ship for research. Ottawa has already spent nearly $1.9 million to build it.

The still-unnamed vessel would mostly prowl the waters off Baffin Island and in Hudson Bay, doing research for Nunavut’s developing fishery.

“Relatively little is known about the fisheries potential in [other] Nunavut waters,” Aariak said.

The Nunavut Fisheries Training Consortium will also use the boat, which is still under construction in Glovertown, NL, to train workers for the inshore fishery.

Nunavut will own the ship, though it will only operate in the summer months and probably spend winters in Newfoundland. The hull of the 20-metre long boat is not ice-strengthened, said Simon Awa, Nunavut’s deputy environment minister.

But where the ship will stay when it’s in Nunavut is an open question. The territory still lacks proper wharves, although a $25 million fishing harbour is still under construction in Pangnirtung.

But Aariak used the news conference to remind Strahl and Nunavut’s MP, federal health minister Leona Aglukkaq, that the territory is still pushing for a deepwater port for Iqaluit. That port has long been on Nunavut’s wish list, to allow faster, safer cargo handling and host cruise ships and fishing boats.

“We are working toward providing nice homes for vessels like that,” Aariak said.

Research agencies, like Fisheries and Oceans Canada and universities have also expressed interest in chartering the boat, which will carry a crew of between 10 and 20 depending on the mission, Awa said.

He added the ship’s operating cost, which will range from $300,00 to $500,000 per year would be split between the Government of Nunavut and researchers who charter the vessel. Nunavut is spending more than $260,000 on equipment for the ship.

As for a name for the vessel, Awa said the GN would likely ask the public for suggestions.

“We’ll probably have a contest.”