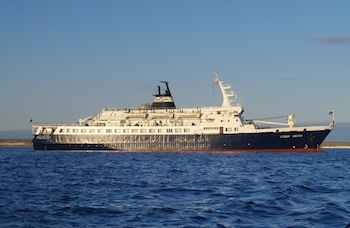 The Lyubov Orlova cruise ship is seen off the coast of Somerset Island in 2009. The Russian-crewed, Cook Islands-registered ship, contracted by Makivik Corp.’s Cruise North Expeditions, missed its first voyage of the season after it failed an inspection in St. John’s. (PHOTO BY CHRIS WINDEYER)

The Makivik-owned Cruise North Expeditions’ 2010 season got off to a rough start last month when one of its ships was written up by Transport Canada for falling short of Canadian safety standards.

The Lyubov Orvlova, a 4,250-tonne cruise ship registered in the Cook Islands, was waylaid in St. John’s this month after inspectors found problems with a mechanical piping system, said Transport Canada spokeswoman Julia McGuire in an email.

McGuire said the ship pledged a long-term fix for the problem, and in the meantime will step up monitoring of those parts of the ship served by the pipe system, which was enough to satisfy inspectors.

The Lyubov Orlova was in port for 15 days, and was cleared by inspectors July 9.

But that was too late for Cruise North’s first trip of the season, an 11-night trip from St. John’s to Kuujjuaq, via the Labrador coast.

“We are satisfied with the ship and its safety standards,” said Jillian Dickens, a Cruise North Expeditions spokeswoman, in an email. “It meets all Canadian and international requirements and our passengers love her.”

“Repairs on ships resulting in cancellations are normal in the cruise business. It even happens to the big ones like Carnival and Princess.”

McGuire said the inspection is required before a foreign vessel can receive the license it needs to trade between Canadian ports.

According to Transport Canada records available online, the Lyubov Orlova passed inspections three times before, in 2008, 2006 and 2000.