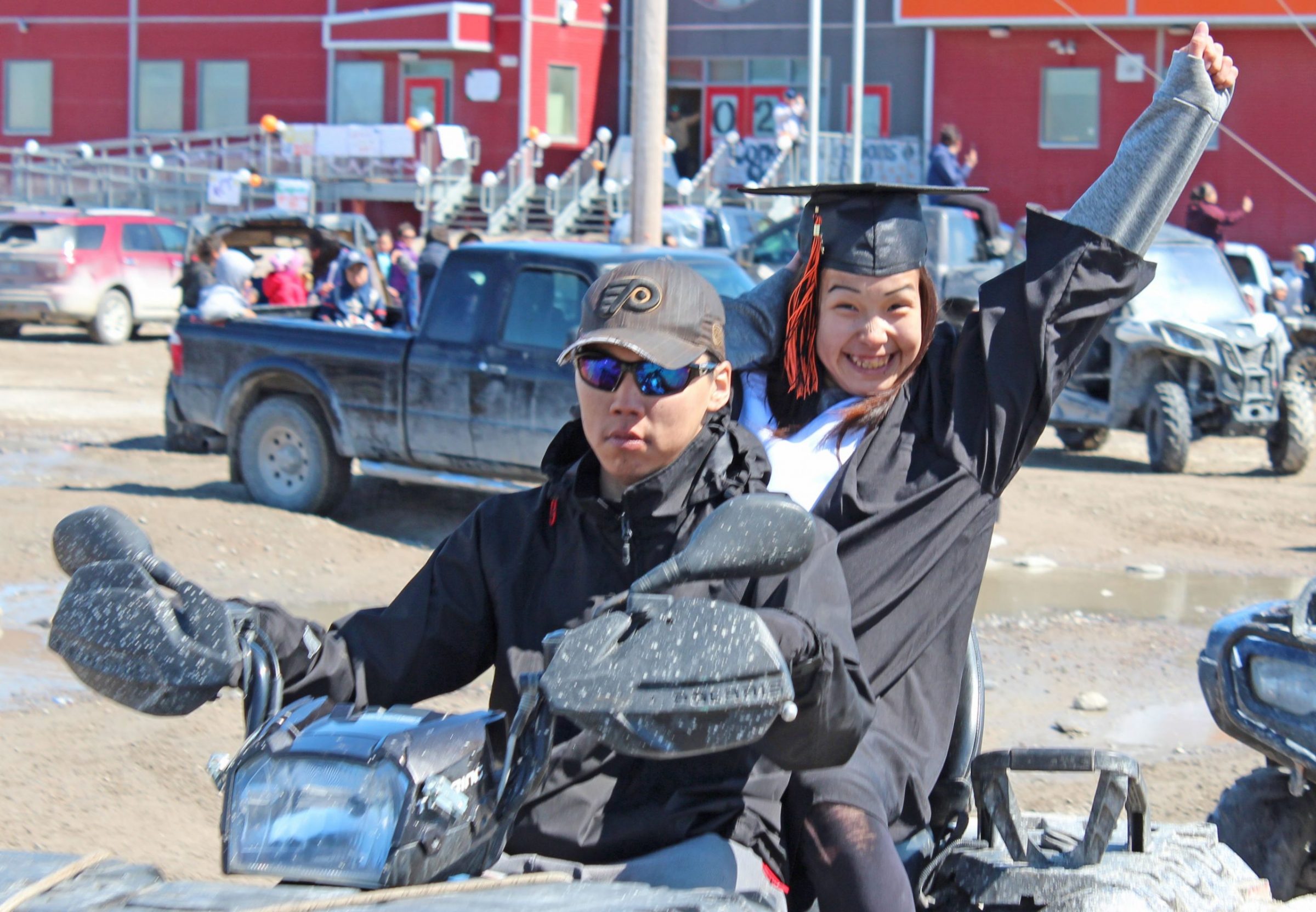 Sharon Akammak, a graduate of Arviat’s John Arnalikjuak High School, celebrates receiving her diploma on June 19 in a socially distanced ceremony as she heads off to take part in a community parade, accompanied by her chauffeur, Aaron Ivuniryuk. (Photo by Daniel Nipisar)

Thanks to the decisions made by the Government of Nunavut early in the year to restrict entry to the territory, to set up isolation hubs in Yellowknife, Edmonton, Winnipeg and Ottawa for returning Nunavummiut, and to arrange travel bubbles with the Northwest Territories and Churchill, Man., the territory held the virus at bay until early November. This was a significant achievement.

Some cases of COVID-19 had previously popped up at mine sites, brought in by workers from the south, but there was no contact with the communities. This is because mining companies had sent their Nunavut-based workers home in March to prevent potential spread of the virus.

COVID-19 was not the only news story in the territory this year, although it sometimes felt like it. Concerns about how RCMP officers interact with Inuit were heightened after three shootings involving police in the territory in the first five months of the year, resulting in two deaths.

In early June, an RCMP officer in Kinngait was removed from the community and “placed on administrative duties,” after a video circulated online that appeared to show the officer knocking a man down with the open door of his vehicle. That arrest was later deemed lawful by the Ottawa Police Service, which had investigated the incident.

There were renewed calls improve oversight of the RCMP in the territory. To that end, the Nunavut government expects Bill 53, an Act to Amend the Royal Canadian Mounted Police Agreement Act, to be passed in the legislative assembly’s winter session, which is scheduled for February 2021.

Nunavummiut were also affected by police brutality in the United States, including the killing of George Floyd in Minneapolis, Minn., this summer. In response, the Nunavut Black History Society organized a Black Lives Matter rally in Iqaluit in June, to show solidarity with Black people in the territory.

The saga of Baffinland Iron Mines Corp.’s proposed phase-two expansion of the Mary River mine continued. A technical meeting in March was cancelled due to the pandemic, then a proposed technical meeting by teleconference failed to go ahead in April. In July the Qikiqtani Inuit Association and Baffinland signed a new multimillion-dollar benefit agreement, called the Inuit Certainty Agreement, related to the operation of the Mary River mine, but northern Baffin communities seemed considerably less enthusiastic about the proposed expansion. The much-delayed technical meeting took place in September, and an in-person hearing is now scheduled to start next month in Pond Inlet.

TMAC Resources Inc., which owns the Hope Bay gold mine complex in western Nunavut, announced in May that it was poised to be bought up by a Chinese gold-mining giant, the Shandong Gold Mining Co. Ltd., better known as SD Gold. Shareholders approved the deal, as did the Ontario Superior Court of Justice, but it is still subject to a national security review.

Here is the Nunatsiaq News list of our most memorable Nunavut stories from 2020. 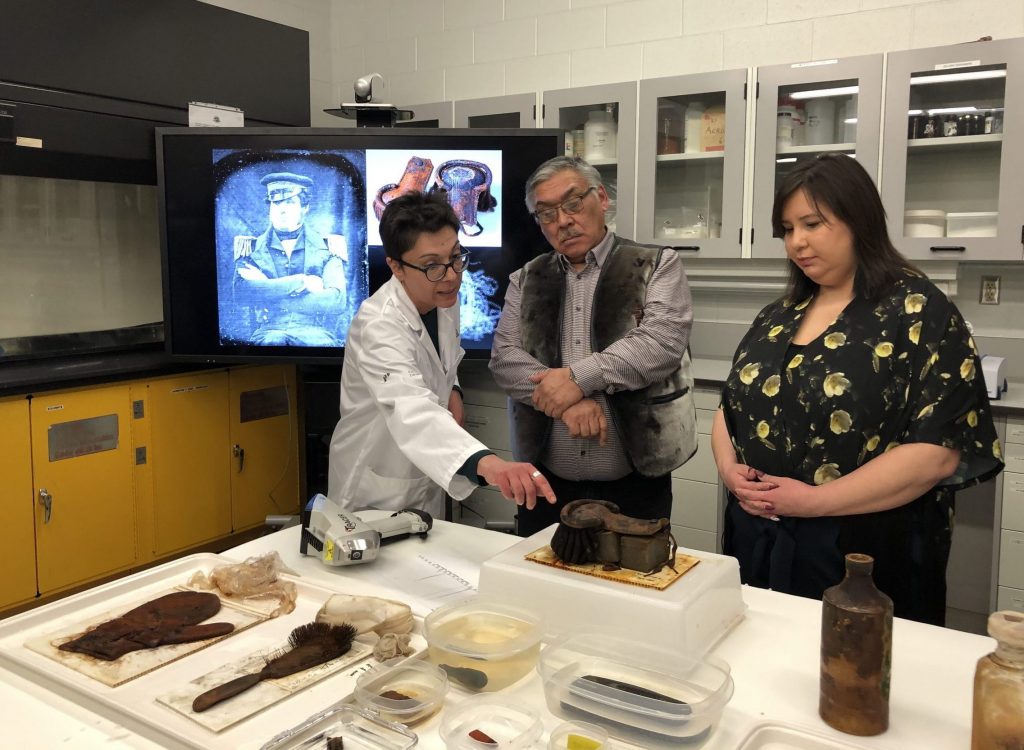 Parks Canada employee Despoina Kavousanaki points out a detail on an epaulette found during the 2019 excavation of the HMS Erebus to Stanley Anablak, president of the Kitikmeot Inuit Association, and Pamela Gross, president of the Inuit Heritage Trust, at Parks Canada’s conservation laboratories in Ottawa on Feb. 20. (Photo by Patricia Lightfoot) 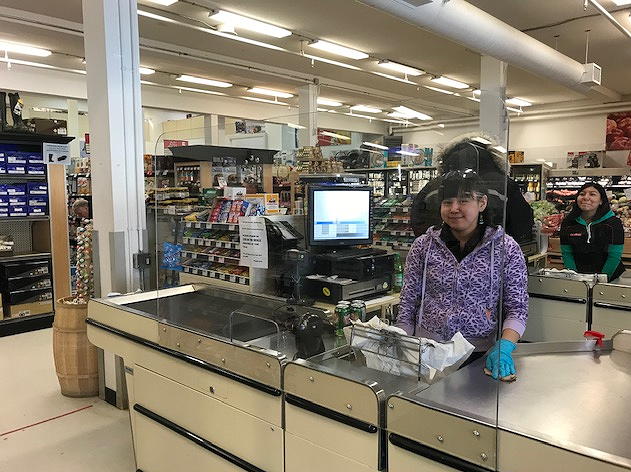 Arctic Ventures in Iqaluit has installed plexiglass shields at its registers to help protect its workers from COVID-19. “For the safety of the community and our hardworking staff we’ve taken safety to the next level!” the store said in a social media posting. (Photo courtesy of Arctic Ventures) 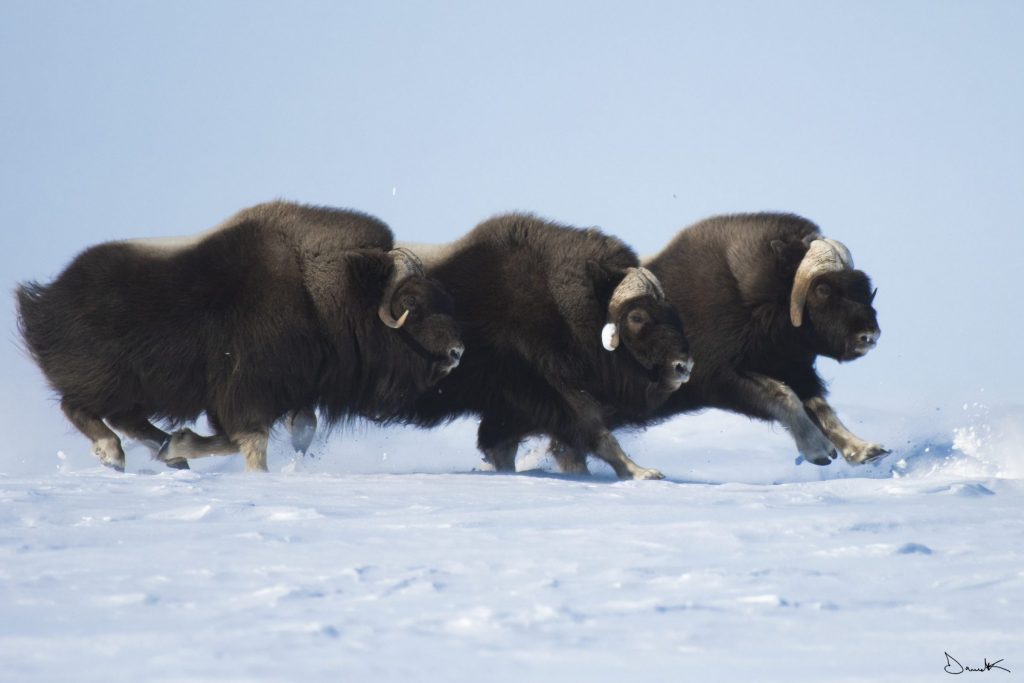 David Kakuktinniq spotted these muskox — or umingmak in Inuktitut — between Rankin Inlet and Baker Lake on April 28. “These beasts are awesome,” he wrote. (Photo by David Kakuktinniq) 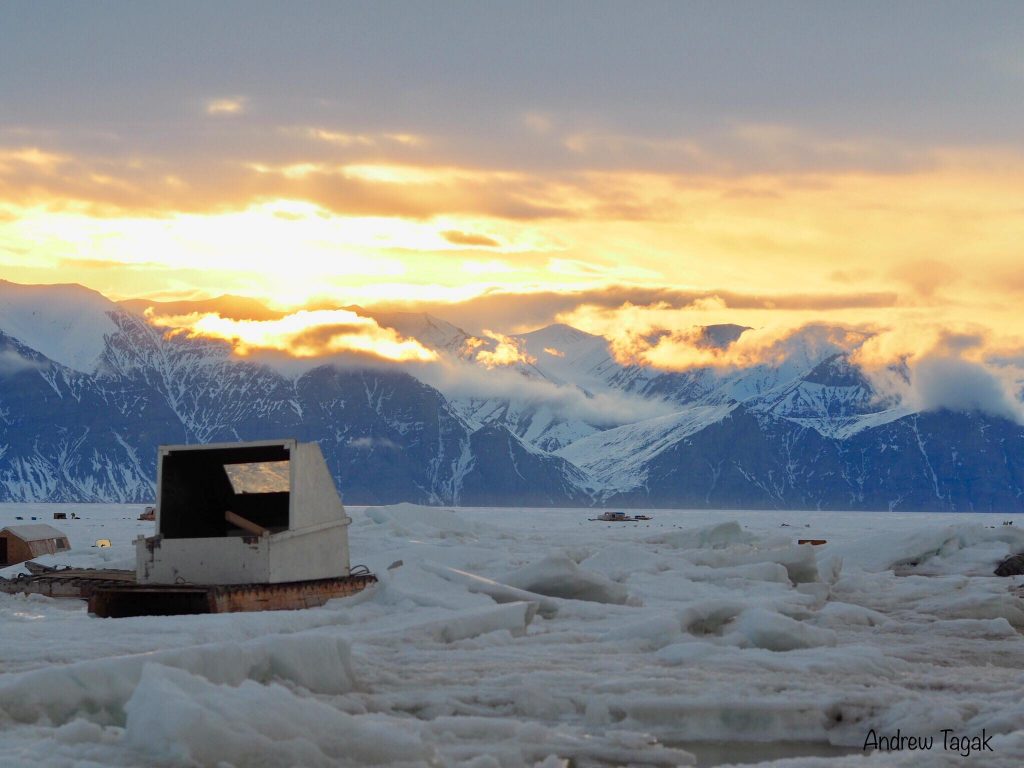 Andrew Tagak took this spectacular photo of qamutiks on the sea ice at Pond Inlet, on May 31 at 1:58 a.m., set against the early morning sun over Bylot Island. (Photo by A. Tagak) 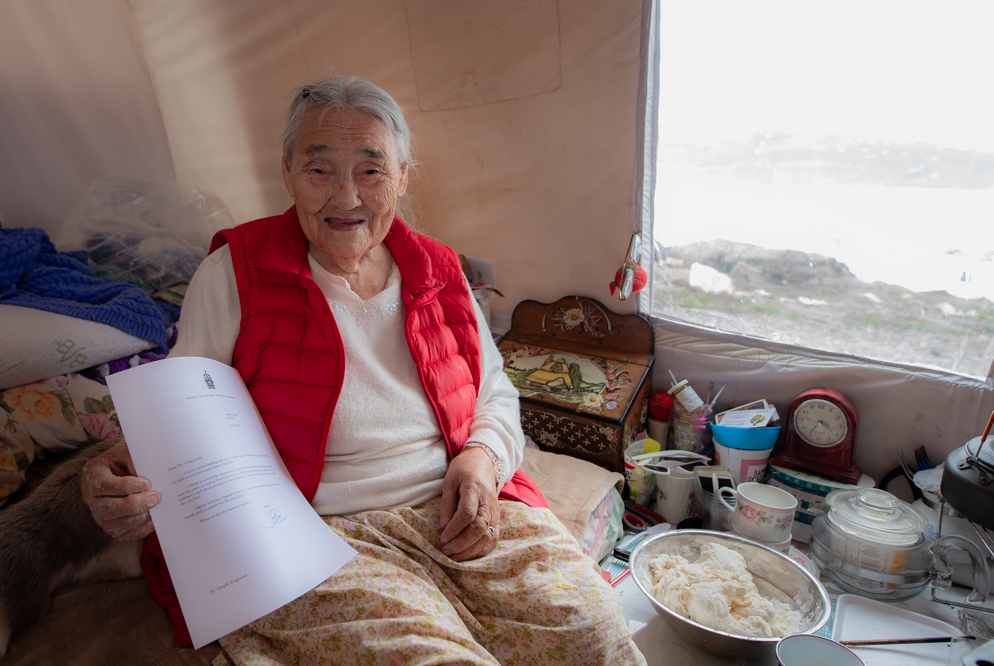 Qapik Attagutsiak holds a letter from Prime Minister Justin Trudeau on June 27, sending her birthday greetings and wishing her well for the year ahead. Arctic Bay resident and regular Nunatsiaq News contributor Clare Kines delivered the letter to Attagutsiak, who was making bannock when he arrived. (Photo by C. Kines) 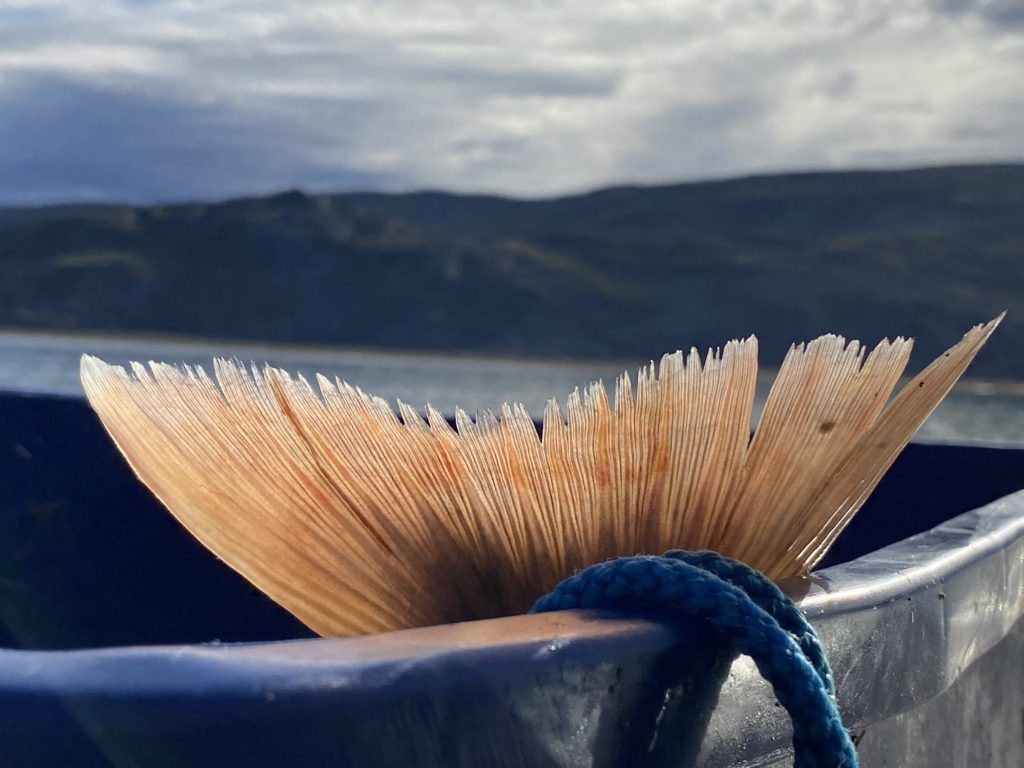 Elisapee Nowdluk of Iqaluit took this photo of the fin of an Arctic char after net fishing at Nungarut, or Bay of Two Rivers, across Frobisher Bay, on Aug. 23. “It was a beautiful day,” she said. (Photo by Elisapee Nowdluk) 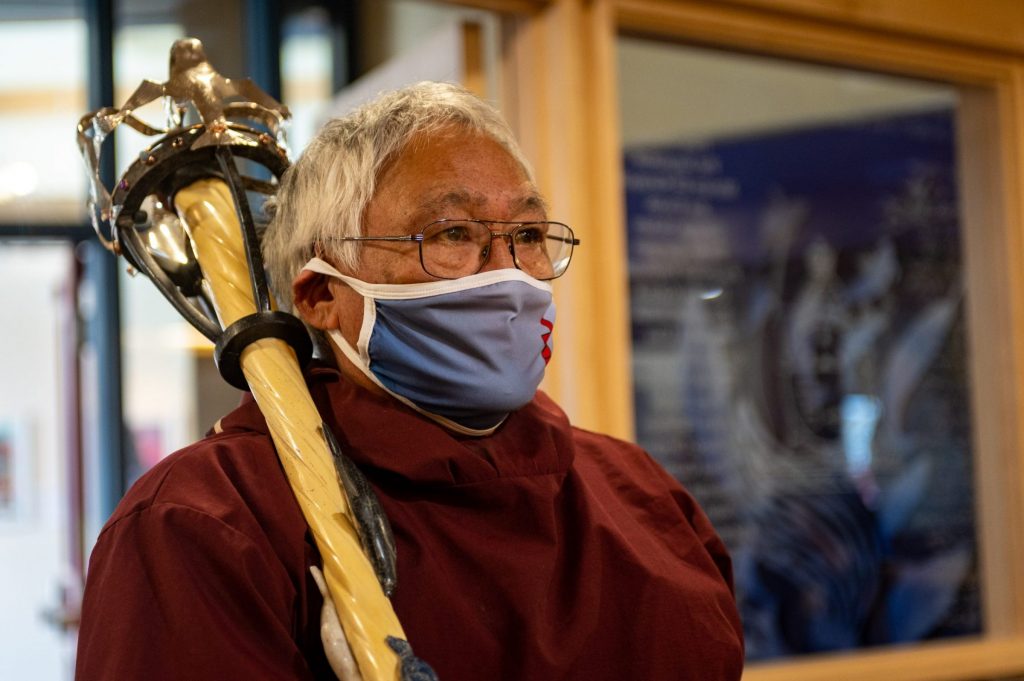 Charlie Audlakiak, the Nunavut legislature’s sergeant-at-arms, carries the mace of Nunavut into the assembly at the start of a special sitting on Sept. 21. It was the first time Nunavut’s MLAs have gathered for a legislative sitting since March 12, when the winter sitting ended. The COVID-19 pandemic forced the cancellation of the spring sitting. In addition to extra physical distancing, some in the chamber, like Audlakiak, wore masks. (Photo by Dustin Patar) 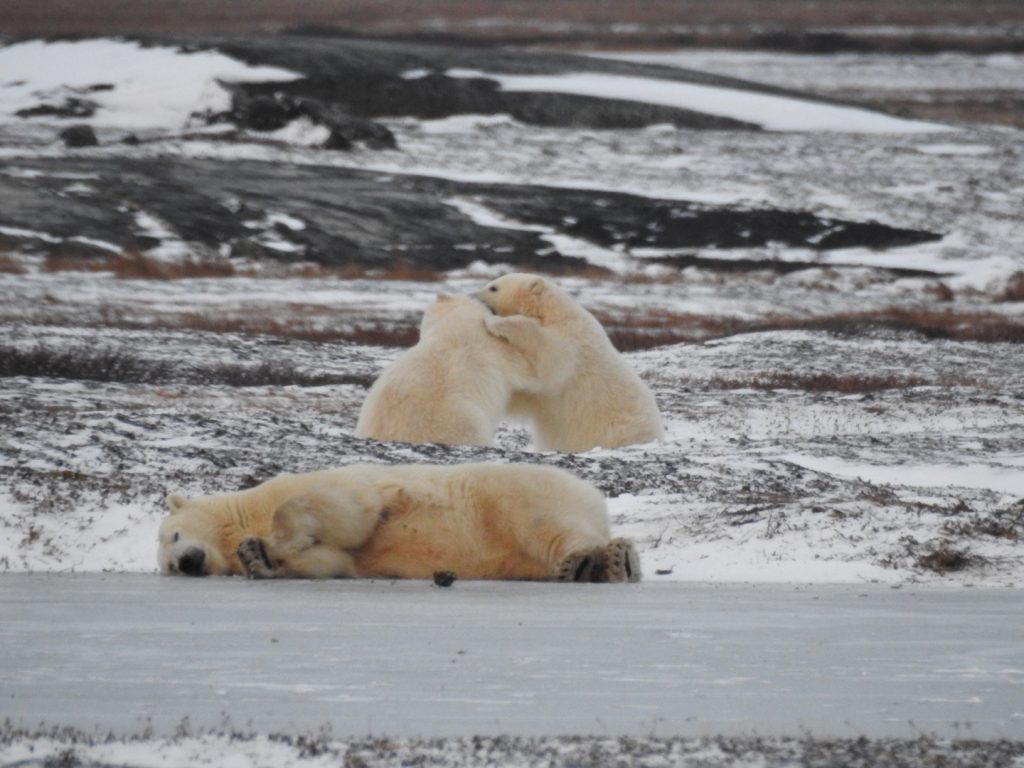 Polar bear cubs wrestle as their mother rests by the airstrip of the Arviat airport on Oct. 29. (Photo by Gordy Kidlapik)