“There’s almost nothing there” 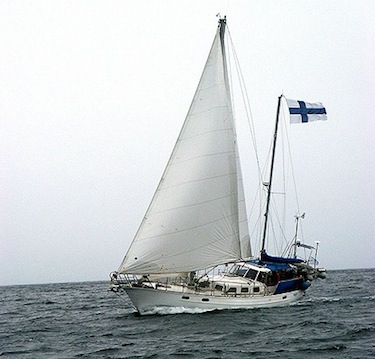 Riitta and Pekka Kauppila, a Finnish couple, sailed the Northwest Passage in this sailboat last summer.

HALIFAX — Canada’s Northwest Passage was an empty and lonely realm this summer — largely free of pack ice and the Arctic wildlife it supports — according to a pair of Finnish sailors who completed a voyage through the waterway last month.

“There’s almost nothing there,” says Riitta Kauppila. “There was ice and snow in places, but mostly the sea was open, and the land was brown, desolate and empty.”

Riitta, a Finnish translator, and her husband Pekka, a former businessman, have been sailing the world in their white, twin-masted ketch “Sarema” since 2002. After spending last winter on the Pacific coast of Alaska, they departed in June, with their dog Latte, for a journey through the Northwest Passage.

Once difficult to navigate, even in summer, because of thick and treacherous pack ice, the passage has been largely open to small, independent sailing vessels since 2007, thanks to a warming Arctic.

Pekka says Sarema was one of five private sailboats, all European, to traverse the passage in 2010.

In late June, Riitta and Pekka set out from Seward, Alaska, sailing through the Bering Strait and east toward Canada’s Arctic archipelago. Three months and more than 13,000 kilometres later, they sailed into Halifax, proud of their achievement, but saddened by much of what they had seen.

The couple says the Arctic still had ice this summer; even in their steel-hulled vessel, they faced the frequent worry of running into ice floes and bergs that could damage or trap their boat. But there was far less ice than they imagined, and much of what they saw, says Riitta, was older pack ice pushed south by wind from higher latitudes, as the more southerly ice fields give way.

The thickest ice they encountered was in the Beaufort Sea, along the coast of Alaska, where at one point Pekka was forced to radio a helicopter, flying off a nearby oil drilling platform, for some eye-in-the-sky advice about the most navigable path forward.

But in Canadian waters, he says, although they sometimes saw ice floes, navigation was “pretty easy.”

Riitta, an avid nature photographer, says she was most surprised by the lack of sea and wildlife. Although seals were abundant, she says they saw only a single polar bear, two caribou and one solitary whale during the entire passage.

“Because the ice is retreating, I think the area is empty of animals that depend on the ice,” she says. “The permafrost is also melting, and we could see places where there had been glaciers, but now the land is just brown and empty. It’s very, very sad.”

On Aug. 24, the Finnish couple reached Gjoa Haven just in time to participate in a ceremony, attended by the Norwegian ambassador to Canada, to commemorate Norwegian explorer Roald Amundsen.

In 1906 Amundsen became the first person to successfully sail the Northwest Passage — charting a new ocean route between Europe and Asia — in a fishing sloop named Gjoa.

The ice was so thick one century ago that Amundsen’s journey took three years. It now takes similar-sized sailboats three months to make the same trip.

Scientists at Environment Canada have said the annual ice coverage in the Canadian Arctic has shrunk by 32 per cent since the 1960s, and that the Arctic archipelago may be entirely ice-free within five decades.