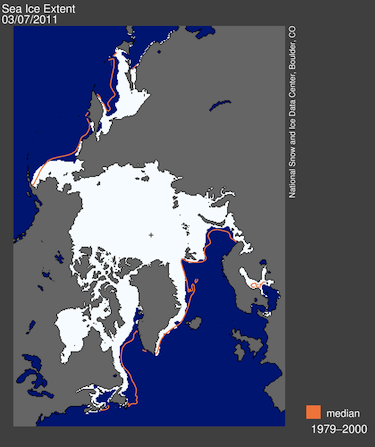 Arctic sea ice coverage appeared to reach its maximum extent for the year on March 7, marking the beginning of the melt season, the United States’ National Snow and Ice Data Center reported in a March 23 statement.

This year’s maximum sea ice coverage tied for the lowest in the satellite record, the NSIDC said.

Since the start of satellite record-keeping in 1979, the maximum Arctic sea ice coverage has occurred as early as Feb. 18 and as late as March 31, with an average date of March 6.

As of March 22, ice coverage had declined for five straight days.

However, there is still a chance that the ice coverage could expand again.

Sea ice coverage in February and March tends to be quite variable, the NSIDC said.

That’s because ice near the floe edges is thin and often spreads around a large area. This thin ice is highly sensitive to weather conditions, moving or melting quickly in response to changing winds and temperatures, the NSIDC noted.

Scientists consider the reduction of sea ice coverage in the Arctic Ocean to be an indicator of warming in the Arctic.