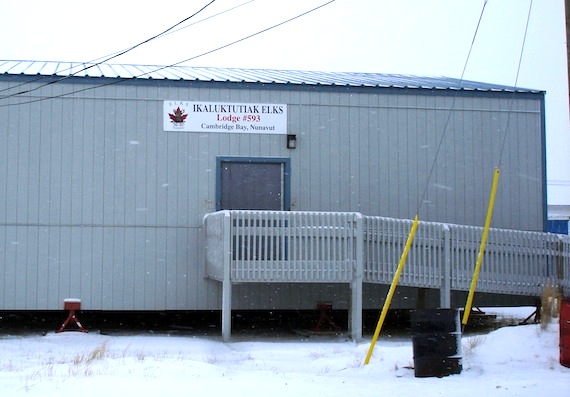 The Ikaluktutiak Elks Lodge 593 has applied for a liquor license at its clubhouse on 2 Kopannoak St. in Cambridge Bay (PHOTO BY JANE GEORGE)

The Nunavut Liquor Licensing Board plans to hold a public hearing May 30 in Cambridge Bay, where people in the community will get chance to say whether they think the Ikaluktutiak Elks Lodge 593 should receive a special type of liquor license called a club licence.

Right now, the Elks Lodge operates as a members-only club that applies for special occasion liquor permits once a week.

Its clubhouse at 2 Kopannoak St. opens Friday nights at 5 p.m. to members, who can purchase drinks as well as supper there. The club admits local people as guests — who haven’t paid the $175 a year membership fee — every Friday night after 8 p.m. for $5 a head, $7 a beer.

With no music, no dancing and bright lights, the atmosphere is more like a canteen than nightclub, and everything shuts down at 11 p.m..

If granted a liquor license, the Elks Lodge still plans to operate the clubhouse as a members-only club, but a lot of the weekly expense — and paperwork — involved in selling alcohol will be cut.

The regular sale of alcohol in Nunavut requires a license.

Under the Nunavut Liquor Act, Nunavut Liquor Licensing Board has the power to issue liquor licenses. The act and regulations set specific rules regarding each class of license and each individual license is issued with rules specific to the licensed establishment.

Some applications for licenses — such as one to open a commercial bar in a community that’s dry or limits alcohol — require a plebiscite.

But since the Elks clubhouse plans to continue operating as a facility open solely for members and guests, a plebiscite isn’t required, but a public hearing is required.

Ohokannoak, who lives in Cambridge Bay, won’t be sitting at the hearing due to a conflict of interest, said Janine Budgell, the manager of quasi-judicial boards at the Government of Nunavut’s justice department.

That hearing will be a chance for members of the Cambridge Bay community “to state their concerns, their comments, or give their blessing, if that’s something the community wants to see happen,” Budgell said.

The board then takes these into consideration and determines what regulations or restrictions might need to imposed before the license is granted, she said.

The judgment could be granted “the next day,” she said. That is, “if everything was in order.”

The board is likely to request a copy of the Elks’ current membership and records of the number of people who go to the Elks clubhouse every week.

“If they can compile all that information and have it before the board at the hearing or the next day, technically the license can be issued at that time. So it could be the next day, or it could be a year from now or more if the requirements say there’s concerns about the building, [and] that they need to add a new exit,” Budgell said.

The Elks’ application for a liquor hearing isn’t public, Budgell said, but some information about the group’s plans will come up during the hearing.

The hearing starts at 6 p.m. May 30 at the Luke Novoligak Community Centre.