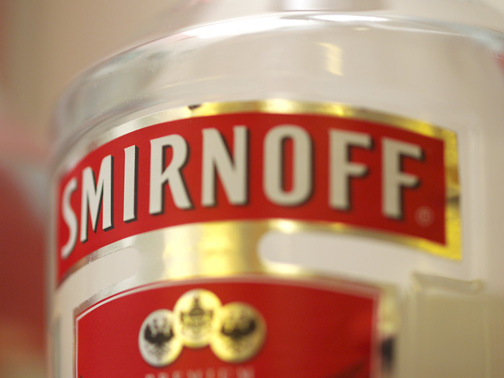 Vodka is the drink of choice for many Nunavummiut. A bottle like this one can fetch as much as $600 or more in a dry community. 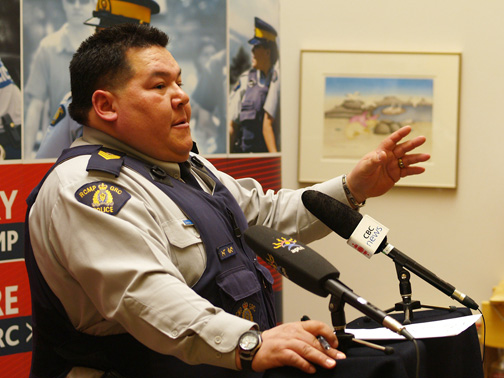 RCMP Sgt. Jimmy Akavak speaks with reporters during a news conference in Iqaluit Wednesday. Mounties in Nunavut have seized roughly $400,000 in bootlegged liquor since the beginning of 2010. (PHOTOS BY CHRIS WINDEYER)

“Pretty much everything’s on the table,” Peterson told reporters March 24. “I haven’t sat down and told the task force what can and cannot be discussed.”

The task force is made up of 10 members, including MLAs, members of local alcohol committees and officials from the Government of Nunavut, Nunavut Tunngavik Inc., the RCMP and the Qulliit Nunavut Status of Women Council.

Peterson said they’re to meet April 22 to start planning the review process. He added that the task force will visit every community in the territory during the process, which could take at least a year to complete.

“We’ve got quite a broad representation from across Nunavut, so we’ll sit down with them and talk about it and they’ll develop an action plan,” Peterson said, urging Nunavummiut to take part in public meetings.

The liquor act was last amended in 2006. Peterson said the task force will produce an interim report and pledged the government would make urgent changes quickly if the task force recommended it.

The announcement of an alcohol task force comes on the heels of a string of bootlegging busts across the territory. At a news conference Wednesday, RCMP Sgt. Jimmy Akavak said the police seized $400,000 worth of bootleg booze since January alone.

Bottles can command high prices, especially in dry communities, where a 60-ounce bottle of vodka can go for as much as $600, Akavak said.

As he spoke, Akavak stood next to a massive display of hundreds of bottles of alcohol, mostly vodka, that police seized in recent raids. Akavak said 80 to 90 per cent of the RCMP’s workload is related to alcohol and police rely on public tips to bust bootleggers.

“A lot of times that’s the only information we have,” he said. “Without the public’s help a lot of this alcohol would not be here today. It would be sold on the streets.”

In one recent seizure in Iqaluit, police allege four men were running a bootlegging ring that had legally ordered more than 2,800 60-ounce bottles of vodka with permits issued by the Nunavut Liquor Commission.

Peterson said the task force may look at imposing caps on the amount of booze customers can order at a time.

“A person can pretty much order as much booze as they want,” he said.

Increased fines for bootlegging and giving the government the power to seize property from convicted bootleggers are also options, Peterson added.

Supt. Steve McVarnock, the commanding officer of RCMP in Nunavut, said capping the amount of liquor a person can include in a single order might be a good idea.

McVarnock said, the police’s job is to bust bootleggers and educate people, especially students, about the dangers of drinking too much.

Municipal councillors and MLAs also showed up for the news conference. Natsiq Alainga-Kango, an Iqaluit city councillor, complained the GN is undermining its own social programs by selling alcohol through the liquor commission.

Alainga-Kango said when Iqaluit had a liquor store social problems were endemic, with suicides and child neglect.

“There’s a murder in that bottle,” she said, pointing at the seized vodka. “One bottle will hurt the whole community.”

But McVarnock said any changes to the liquor act have to address the reasons why people drink in the first place.

“We cannot stop individuals from drinking alcohol,” he said. “That has to be a personal choice.”

“If there’s nothing to stop the systemic flow [of alcohol] in the first place, all you’d better do is hire more police, hire more judges and hire more prosecutors, because all we’ll do is recycle the problem.”