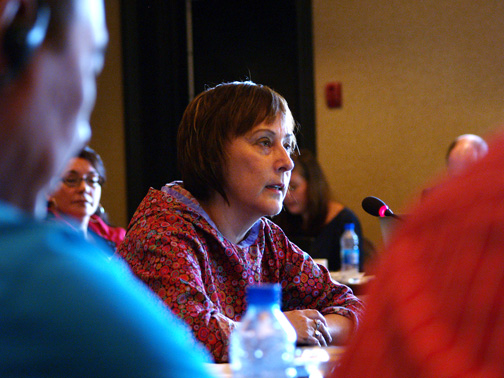 A pair of upstart challengers took aim at the two top jobs at Inuit Circumpolar Council Canada, providing some unexpected drama at the organization’s general meeting in Iqaluit June 25.

Hanson and Smith were tied after two separate ballots. Under the ICC’s rules, the sitting vice president, Ford, casts the tie-breaking vote.

Told this, Ford sighed. “I just have to blurt it out?”

“You can’t feather the bylaws at this point,” he said.

Mary Simon, the president of Inuit Tapiriit Kanatami, who was chairing the meeting because Smith was standing for election, said the established rule, even if flawed, couldn’t be changed on the fly.

Technically Ford was to vote by secret ballot, even though her choice would have been no secret.

“Instead of casting a secret ballot I will just lend my support right now to Duane Smith,” Ford said.

Ford, a lawyer originally from Makkovik in Labrador, said it wasn’t hard to cast a deciding vote for Smith.

“I have to say it was more difficult losing,” she said. She’ll end eight years of service as ICC Canada’s vice president when her four-year term expires July 1.

Ejesiak said he’d spent time lobbying delegates—three voters each from Nunavut, Nunavik, Nunatsiavut and the Inuvialuit Settlement Region—but felt going in that the vote was a toss-up.

Ejesiak said the tiebreaking process should be replaced by a system like the one in federal and territorial elections, where a tie is broken by drawing a name from a hat.

“When it’s that close to the wire I can’t help but feel for (Hanson) who didn’t win,” he said.

Hanson wouldn’t say if she thought the voting procedure should change, but said she didn’t harbour any grudge because Ford was simply following the rules.

For Smith, who offered himself to delegates as the steady hand at the wheel of ICC Canada, the win was a relief.

And while Smith boasted at one point that Canada’s political parties could take a lesson from ICC’s process, he later admitted to reporters the tiebreaking process should probably change.

Smith called for “unity and a strong Inuit voice that’s consistent” as the Canadian delegation readied for ICC’s general assembly in Nuuk this week.

But the ICC Canada meeting, like the ITK meeting the day before, revealed Canada’s Inuit governments aren’t marching in complete lockstep, especially on uranium mining, where there are stark disagreements between NTI, which is pro-uranium mining, and Nunatsiavut, which has a moratorium on uranium in place.

Still, ICC Canada, expressed unity on several fronts, particularly their united opposition to the Arctic Five grouping of polar coastal states as an emerging rival of the Arctic Council, where Inuit sit as permanent participants.