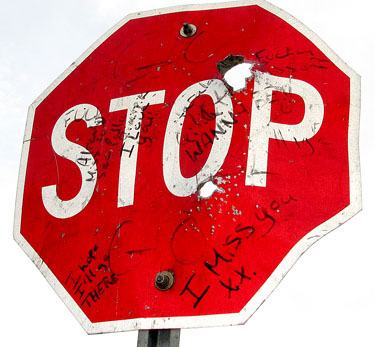 A stop sign in Cape Dorset punctured with two bullet holes following a recent outbreak of gun violence in the community. The grafitti on the sign contains messages for the two youths arrested Oct. 13 in connection with one of the shooting incidents. (PHOTO BY KENT DRISCOLL/APTN)

South Baffin MLA Fred Schell is calling on Nunavut’s airlines to help control the flow of alcohol into communities in the wake of a spree of gun violence in Cape Dorset.

Schell also called on Nunavut’s airlines “to show a greater commitment to social responsibility” and work with Nunavut’s liquor commission to coordinate the arrival of alcohol shipments into communities.

Police, politicians and citizens alike have complained in the past about large numbers of booze orders arriving in communities at once, triggering outbreaks of abuse and violence.

Peterson responded that he’s already had discussions with airlines about the problem, and encouraged the Nunavut Liquor Commission
to study the problem.

In March, Peterson announced the launch of a task force to review Nunavut’s liquor laws.

Schell also blasted liquor rules in open communities that put no cap on the amount of alcohol people can order.

He said the current system is what allowed an Iqaluit bootlegging ring, busted by police in March, to stockpile close to 2,800 bottles of hard liquor, mostly vodka.

“It seems common sense to me that if a small group of individuals are legally obtaining import permits to acquire thousands of bottles of booze, it’s obvious that these quantities cannot reasonably be for personal consumption,” Schell told the assembly.

Peterson replied by repeating an idea he floated during a news conference in March: examining the possibility of civil forfeiture to seize cash and property from convicted bootleggers.

The recent spate of gunplay in Cape Dorset included an incident where two boys got hold of unsecured guns and began firing at houses.

In that incident, police exchanged gunfire with at least one of the youths in a local softball field, wounding one of the alleged shooters.

That incident did not involve alcohol, police said.

But it did prompt calls for Nunavummiut to take better care of firearms by being more vigilant about storing guns and ammunition separately and using trigger locks.

Schell said he’ll personally buy trigger locks for anyone in Cape Dorset of Kimmirut who can’t afford them.

“The simple precaution of storing your firearms and ammunition separately: it just makes common sense,” he said.