“The accused didn’t stop shooting until three men were dead” 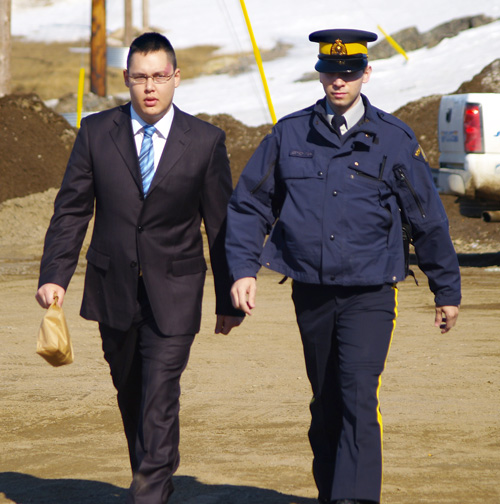 Chris Bishop is led into the Iqaluit courthouse before the start of trial May 26. Bishop faces three counts of murder and two counts of attempted murder in connection with a shooting in Cambridge Bay in January, 2007. (PHOTO BY CHRIS WINDEYER)

A cool and composed Chris Bishop tossed the butt of a joint at the body of one of the three men he’s accused of killing in Cambridge Bay on the early morning hours of Jan. 6, 2007, court heard May 26, as Bishop’s trial for three counts of second degree murder and two counts of attempted murder began in Iqaluit.

Crown prosecutor Carla Ball told jurors a witness will testify Bishop “flicked a roach at Dean Costa who was lying at (Bishop’s) feet and said ‘here you go.’”

Bishop is charged with second degree murder in connection with the deaths of Costa, Keith Atatahak and Kevin Komaksiut, as well as the attempted murders of Antoinette Bernhardt and Logan Pigalak.

All five were shot with rounds from a 7.62-calibre semi-automatic assault rifle, fitted with an illegal banana-shaped clip that held 30 rounds of ammunition, RCMP Sgt. Ernie Dechant testified May 26.

The jury heard that two calls Bishop made that night to the RCMP’s Operational Communications Centre in Iqaluit as several people were trying to break into his apartment.

The first call, placed at 2:50 a.m. January 6, tells a police dispatcher “there’s some guys outside trying to kick down the door.” Bishop then said the people were leaving.

Less than five minutes later, Bishop phones the dispatcher again and says “they’re on their way back with more people.”

The dispatcher tells Bishop to “hold on” as she calls police in Cambridge Bay. During the pause there are audible yelling voices and banging sounds in the distance.

“They’re trying to come in. There’s more people. Please send someone quick,” a panicked Bishop tells the dispatcher. “I’m by myself. I don’t have any weapons.”

But Bishop had the assault rifle, plus two swords and a crossbow inside his apartment, Dechant testified. Dechant was a forensic investigator stationed in Iqaluit at the time of the shootings who led the investigation.

Reading from lab reports, Dechant testified that Costa was shot several times just inside the door of Bishop’s bedroom, while Atatahak was shot in the adjacent hallway.

Dechant said Costa’s blood was found on pants Bishop was wearing that night, indicating Bishop was “in close proximity” to Costa “during bloodletting.”

Costa was hit by at least 10 bullets, including four in the head, two in the back and one in the neck. He was also shot twice after he died on the apartment’s front step, Dechant testified.

Atatahak’s body was found next to a pickup truck parked just in front of Bishop’s apartment at 6B Kulik Road. He had been shot in the chest and thigh, while a third bullet grazed his right leg.

All three men were found with alcohol in their bloodstreams two to three times the legal driving limit. Post-mortems also revealed the men had been smoking marijuana that night.

Komaksiut’s body was found more than 40 metres away from the front step of 6B. He had been shot five times, in the back, thigh, jaw and both arms. Three women in the courtroom cried as a police video of the crime scene showed Komaksiut’s frozen body lying in the street.

Bernhardt was shot through her shoulder and had to be medevaced to Yellowknife, while Pigalak was treated for a gunshot wound that grazed his arm, and was released from Cambridge Bay’s health centre.

A nurse’s report said both Bernhardt and Pigalak smelled of alcohol.

The trial continues May 27.

(Comments are closed on this article.)