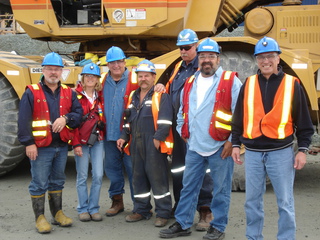 Workers at Xstrata’s Raglan Mine in Nunavik ratifed a new six-year collective agreement on May 21 that will see a lot more money go into their pockets and give them more time with their families.

The new labour deal brings their wages up to par with other northern mines, says a news release from the metalworkers union, the Syndicat des métallos, which represents 60,000 workers across Quebec.

Raglan workers who live in Nunavik will receive a $1.50 an hour bonus due to the high cost of living in the region, said the news release.

The new agreement also allows the mine’s 400 workers — of whom about 15 per cent are Inuit — to work fewer shift rotations at the mine.

This means they will spend up to six months of the year at the mine instead of nine months.

“That was one of our important demands and we obtained that. Workers at Raglan make a big sacrifice in being away from their families for long periods, [so] we want this to be recognized in their working conditions,” said Raglan’s union representative, Marc Thibodeau.

As well, workers will now be paid time-and-a-half for their weekend work, which means an increase of 5.5 per cent a year in their salaries.

Another bonus will be tied to the performance of the nickel mine.

This may go as high as $5 an hour, and that’s in addition to an existing bonus that can run as high as 25 per cent of total salary.

New retirees, 62 and over, with more than 10 years of service, will get a parting bonus of $1,000 per year of seniority.

From 2012, workers based in the South will be able to fly to the mine from Quebec City, as well as from Montreal and Rouyn-Noranda.

The new package is expected to help Xstrata recruit more than 60 new miners needed for its operations located between Salluit and Kangiqsujuaq.