ITK thanks Sheila Fraser for a job well-done

“The temporary discomfort of a few is the inevitable and necessary price… for the great value of your work.” 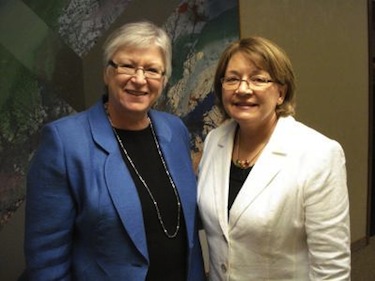 Canada’s outgoing auditor general Sheila Fraser, left, with Inuit Tapiriit Kanatami president Mary Simon in Ottawa May 26. Simon thanked Fraser for the work she did to improve governance across Nunavut during her 10-year term. (PHOTO COURTESY OF ITK)

Fraser, whose term expires May 30, issued her first report on the Nunavut government’s finances in November 2001.

Over the next decade, she probed the territorial government’s public accounts, exposing numerous shortfalls, including poor financial management and lack of capacity in many Government of Nunavut departments and agencies.

In a speech made at the Ottawa office of the auditor general May 26, Simon thanked Fraser for her office’s ongoing efforts to understand “the realities of life for Inuit in the Arctic, and of the institutions of Arctic governance.”

Those efforts included a trip Fraser made to Arctic Bay with the late Jose Kusugak, a former ITK president.

Simon also acknowledged that, along the way, Fraser earned the respect and trust of Inuit — and also their affection.

Fraser became a frequent visitor to Iqaluit, where she made eight appearances before Nunavut’s legislative assembly over her 10 years as auditor general. Her final appearance before a legislative committee was in Iqaluit this past April.

“I will not pretend that the reports of the Office of the Auditor General have not caused occasional heartburn to Inuit and others in the Arctic who have been charged with political responsibility for sound use of public dollars in our part of Canada,” Simon said. “But the temporary discomfort of a few is the inevitable and necessary price that should be paid, and paid willingly, in exchange for the great value of your work.”

Fraser delivered her final messages May 25 in her last public address as auditor general.

In a strongly worded speech in Ottawa, just steps from Parliament Hill, and at a later news conference, Fraser’s message was a reflection of the reputation she earned over a decade as the country’s no-nonsense and highly respected spending watchdog.

Fraser called on the federal government to launch a national discussion and provide long-range cost estimates associated with issues such as climate change and infrastructure.

She said much more needs to be known by Canadians about what the bills will be for those priorities, how they will be addressed and whether the costs will be left to future generations.

In her speech, Fraser said the “extreme impacts” of climate change are most readily apparent in Canada’s North.

“Canada needs a national long-term climate change strategy — one that will allow us to mitigate and adapt to changes to cover the costs and to engage Canadians in adjusting both their attitudes and their activities.”

With files from Postmedia