Fossils from Ellesmere Island reveal a much-warmer past

“The clues they reveal about Nunavut’s ancient past are irreplaceable” 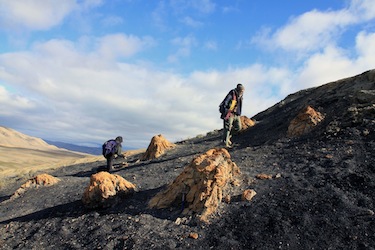 Ellesmere Island today: its Strathcona fossil forest, with its 50-million-year-old tree trunks, is typical of the High Arctic sites scientists study to better understand what a warmer climate means for that polar region.(PHOTO COURTESY OF JAELYN EBERLE) 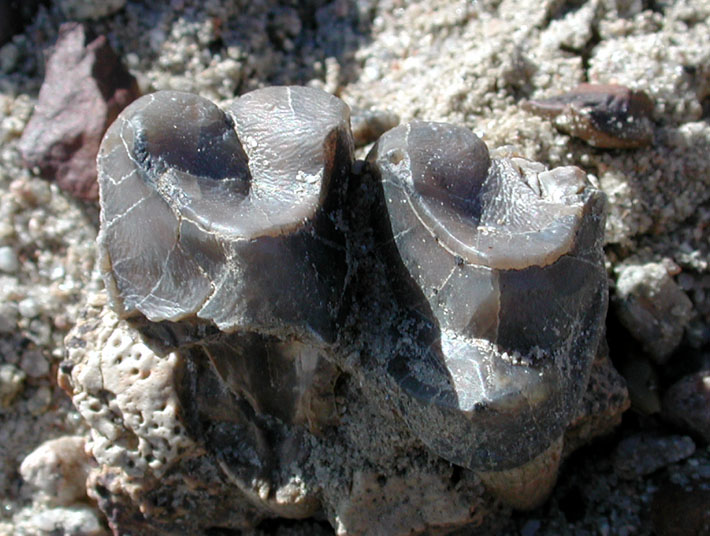 An analysis of the teeth of the hippo-like mammal Coryphodon from Ellesmere Island and other critters shows they lived in much warmer environment 53 million years ago. (PHOTO COURTESY OF JAELYN EBERLE) 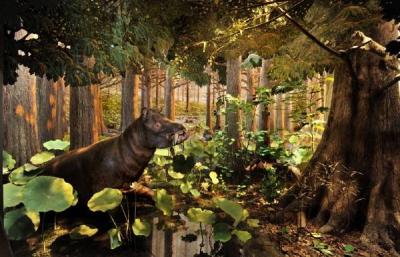 Here’s a look at the warmer, wetter world of Ellesmere Island, 53 million years ago, as a hippo-like mammal, called a Coryphodon, enjoys mild temperatures, year-round. (COURTESY OF THE AMERICAN MUSEUM OF NATURAL HISTORY)

Studies of ancient teeth, fish bones and turtle shell fragments are opening a new window into the much warmer past of the High Arctic region.

This was a time— about 53 million years ago— when giant turtles, large snakes, alligators, flying lemurs, tapirs, and hippo- and rhino-like mammals roamed in places now favoured by muskox and hares.

During that long-ago era great swampy forests also covered the High Arctic from northern Baffin Island across to Banks Island in the western Arctic.

Fossil remains from that lush, warmer period, which can still be found across the High Arctic islands, also include the stumps of trees, some as large as washing machines.

From her study of these fossils, Jaelyn Eberle from the Univ. of Colorado has determined that some 53 million years ago temperatures on Ellesmere Island averaged from 19 to 20 C during the warmer months and from 0 to 3.5 C during the colder period of the year.

This means the winter temperatures probably never fell below freezing and the summers were pleasant, Eberle told Nunatsiaq News.

That’s unlike today, when the average annual temperature for Ellesmere hovers around -19 C.

To gauge the ancient temperature range, Eberle used new techniques which can analyze the traces of oxygen from the water that the creatures drank and swam in.

And to provide a good comparison for this study, Eberle included fossils from hippo-like mammals, fish and turtles.

The results, discussed in her recent paper in the Earth and Planetary Science journal, also raised questions about how these warm and cold-blooded critters managed to adapt to slightly colder conditions.

For example, Eberle and her team found alligators which lived in prehistoric Ellesmere could withstand slightly cooler winters than ones you find today— although observations from zoos do show alligators can survive short periods of below-freezing temperatures by submerging themselves in water, she said.

And the presence of large land turtles is also puzzling, Eberle added, since today’s large turtles live places like the Galapagos Islands where the winters average about 10 C..

Arctic fossils for this study were recovered from near Bay Fiord on central Ellesmere Island.

But many of the fossils Eberle has used before come from Strathcona Fiord on Ellesmere Island, which was recently in the spotlight due to a coal mine planned for the area by British Columbia-based Weststar Resources Corp..

The company told scientists like Eberle that it would preserve any important site, but earlier this year the Nunavut Impact Review Board rejected its initial mining proposal as being too risky for both wildlife and fossil deposits.

Eberle’s submission to NIRB, quoted in the agency’s report to the department of Indian and Northern Affairs, said Ellesmere’s fossils “are a part of Nunavut’s heritage and a legacy for generations of Nunavut children. These fossils, and the clues they reveal about Nunavut’s ancient past, are irreplaceable.”

NIRB’s decision means the project’s fate now lies with the federal government, an uncertainty that Eberle said troubles her.

with files from Postmedia