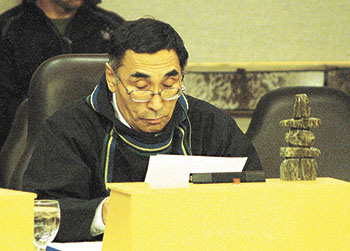 Housing minister Tagak Curley says he will not order a forensic audit into the $110-million cost overruns at the Nunavut Housing Corp. without new evidence pointing to criminal wrongdoing. (FILE PHOTO)

Regular MLAs stepped up their push Oct. 25 for a deeper investigation into the circumstances surrounding millions of dollars of cost overruns at the Nunavut Housing Corp.

A frustrated Johnny Ningeongan, MLA for Nanulik, repeatedly asked housing minister Tagak Curley to explain why the government refuses to order a forensic audit into the $110-million housing corporation boondoggle.

Ningeongan noted a Deloitte and Touche report on problems at the housing corporation even acknowledged it may not have uncovered the full extent of problems at the Nunavut Housing Trust, which went $60 million over budget.

“The minister appears adamant that we accept the report, stop asking questions, forget about the issue and move on,” Ningeongan said in the assembly. “I want to remind the minister that Nunavummiut are adamant that this issue be dealt with thoroughly.”

Curley replied that the current government was stuck with bad accounting from the previous regime, and installed new management at the housing corporation, which uncovered the accounting problems.

“I think this government has been fair and open and transparent with respect to (the) Nunavut Housing Corp.,” he said. “We discovered the flawed budgeting process….”

Curley said he would not order a forensic audit without new evidence pointing to criminal wrongdoing. Curley and Hunter Tootoo, the previous housing minister, have both said there is no evidence of that.

“If there are any [pieces of] evidence that should lead to a forensic audit, I would like the member [Ningeongan] to name one or two,” Curley said in the house.

“Auditors of this kind normally don’t go on a witch hunt,” Curley said.

Curley went to say that regular MLAs have the ability to hold hearings on the cost overruns and call witnesses if they wish.

They plan to do just that. Quttitiktuq MLA Ron Elliott announced he’d seek a motion Oct. 27 to refer a series of documents on the housing corporation to the legislature’s committee of the whole.

Those documents include the Deloitte and Touche review, a related audited statement of expenditures for the housing trust, an NHC contracting report for the year ending March 31, 2009, and a housing trust project summary dated Sept. 10.

Also tabled in the house was a scathing letter from Lazarus Yotamu, an architect who used to work for the housing corporation as the manager of design and development.

“They keep paying invoices without verification on the ground if the project is indeed completed or not,” Yotamu writes. “In other words, projects are run on a wing and a prayer.”

Ningeongan told reporters regular MLAs are unanimous that there needs to be further investigation of problems at the housing corporation.

“I wouldn’t have tried pursuing this question further if I knew that there was different opinions coming out of the regular MLAs,” he said. “They honestly feel that we need to go further.”

Ningeongan said he shouldn’t have to come forward with evidence of any crime in order to get the government to go ahead with a forensic audit or public inquiry.

Doing so, he said, would clear the air and allow MLAs to move on to other issues.

“As regular members, we’ve sensed that something is not quite right yet here,” he said. “We’re trying to put the puzzle together but not having any kind of success.”

On Oct. 20, in response to a question from South Baffin MLA Fred Schell, Curley said an action plan to fix the housing corporation is being formulated.

He refused to say when that plan will be complete.