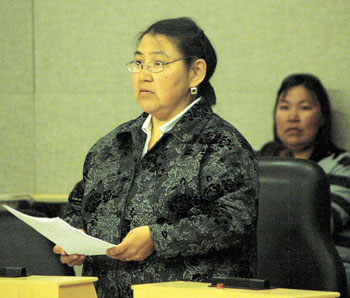 Jeannie Ugyuk, MLA for Nattilik, asked Hunter Tootoo, Nunavut’s education minister, for more information on some of the education department’s controversial policies during the Oct. 22 question period in the territorial legislature. (FILE PHOTO)

Jeannie Ugyuk, MLA for Nattilik, has a pretty good idea of the frustration parents might feel when they try to get answers about their kids’ education.

During the Oct. 22 question period in the Nunavut legislature, Ugyuk hammered Hunter Tootoo, the education minister, with several specific question, but was unable to nail down many details.

Ugyuk asked how much progress the education department had made on responding to the recommendations on education, which were contained in the 2009 Qanukkanniq Government of Nunavut report card.

Recommendation number five of the report card said the GN should “benchmark the content of made-in-Nunavut curriculum against other jurisdictions to ensure that educational standards in Nunavut are comparable to quality in other jurisdictions.”

Tootoo said his department is preparing “a Grade 12 assessment tool”— which he said will offer more valid measures of ways of measuring student knowledge and skills than the Alberta Grade 12 standardized tests for social studies exams.

But Ugyuk wanted more information, noting parents, students and some MLAs have raised concerns that Nunavut’s Grade 12 does not meet the same standards as in other jurisdictions.

“Can the minister provide an update on what specific measures have been taken to address this concern directly?” she asked Tootoo.

Parents need to better understand what courses their children are taking, whether these will prepare a student to go on to university, was Tootoo’s indirect response.

Ugyuk also asked Tootoo what his department’s response was to recommendation number nine of the Qanukkaniq report, which stated there’s a need to “develop anti-truancy and anti-drop-out campaigns, and eliminate social promotion.”

The practice of “socially promoting a student through to Grade 12” can set a student up for disappointment in the future, Ugyuk said.

Tootoo stated that the education department does not support social promotion or retention. Rather, the emphasis is on continuous progress, Tootoo said, “so we’re looking to try to keep students to continue learning at their pace.”

As for keeping kids in school, “that’s one of the things that the department is working on to be able to hopefully…… to find ways to attract and retain these students in the system and also to get them to continually keep learning so that they are always learning something and hopefully keep their interest in the school,” Tootoo said.

“One of the main criticisms of inclusive education is that it supports social promotion,” she said, asking Tootoo to describe what kind of input has been provided on this issue and what changes there will be to regulations as a result of that input.

Tootoo said his department is now saying “this is something that is actually going to take us two to three years to complete.”