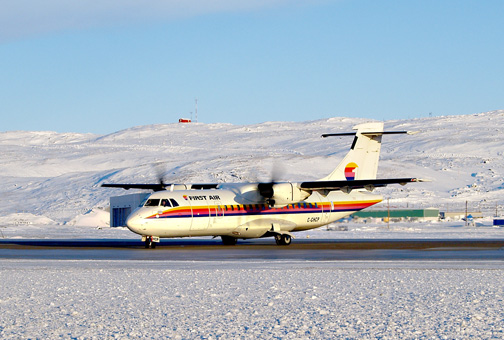 First Air announced this week it will start flying an ATR 42, like this one pictured landing at the Iqaluit airport recently, between Baker Lake and Rankin Inlet. The ATR will also serve stops three times per week on a route that also includes Chesterfield Inlet, Coral Harbour, Cape Dorset and Iqaluit. (PHOTO BY CHRIS WINDEYER)

The changes expand on moves First Air made last year to break into the Kivalliq market, when it launched flights between Rankin Inlet, Baker Lake and Arviat, said Chris Ferris, vice president of marketing and sales.

“This is a case of First Air bringing some competition to this marketplace,” Ferris said in a telephone interview from Montreal.

For travellers out of Chesterfield Inlet and Coral Harbour, that means the possibility of flights to the capital without changing planes in Rankin Inlet.

First Air will also begin flights between Repulse Bay four days per week using a Beech 99 aircraft owned by Unaalik Aviation. And an existing flight between Arviat and Rankin Inlet will now stop in Whale Cove three days per week.

Ferris said using the larger ATR between Baker Lake, Rankin, and Iqaluit is possible because First Air has captured enough market share to make use of the plane, which usually carries both passengers and freight, profitable.

The changes mean turboprop flights between Baker Lake, Rankin Inlet and Iqaluit six days per week and allows the ATRs to get regular maintenance in the capital.

ATRs already serve most First Air routes in the Baffin region. They’d likely be configured to carry between 12 and 18 passengers per flight, as well as cargo.

“Right now, we are looking for freight customers,” Ferris said.

He added there will be some promotional fares on the new routes, but wasn’t ready to give details.

Ferris also declined to confirm a report that First Air is making impending changes to aircraft on the Iqaluit-Ottawa flight. Last week, APTN reported the airline was poised to start flying a Boeing 737-500, configured business class style with four seats per row, on Nunavut’s busiest route.

But Ferris said First Air, which has faced complaints in the past about its aging and inefficient fleet of two 737-200 and a 727-200 which it flies on North-South routes, is looking at buying newer planes.

“We’re still researching the different models that are available, but we are looking at bringing up more fuel-efficient jet aircraft into that marketplace and we have looked at all business class seating as an option,” Ferris said.

Meanwhile, the North’s other major airline inked a five-year deal to ferry workers to the Kearl oilsands project in northern Alberta.

The Globe and Mail reported Jan. 28 that Canadian North struck a deal to use some of its 737-200s to fly workers from Calgary and Edmonton to the Kearl oilsands project, about 70 kilometres northeast of Fort McMurray.

Canadian North president Tracy Medve also told the Globe the airline plans to begin buying newer 737-300s in the next couple of years.