In some regions of northern Canada, almost half of all adults have not completed high school, compared to one in 12 in southern Canada, according to the Centre for the North’s “High School Confidential” map, the third in the Conference Board of Canada’s “Here, the North” series.

“There is a growing consensus that high school completion is linked to future opportunity. People without high school diplomas have fewer job opportunities, employment stability, and lower future earnings potential,” Gilles Rheaume, vice-president of the Conference Board of Canada, said in an Aug. 26 news release.

Parts of northern Saskatchewan, Nunavut, and northern Manitoba have the highest rates of adults without a high school diploma.

What this means is that random survey of 25 to 64 year olds in Ottawa would find one in 12 people doesn’t have a high school certificate.

But in Nunavut, that number would be closer to one in two, says the Centre for the North, a Conference Board of Canada program, which works with aboriginal leaders, businesses, governments, communities, educational institutions, and other organizations, to achieve “prosperity in the North.”

Its 2010 study, “Pathways to Success–How Knowledge and Skills at Age 15 Shape Future Lives in Canada,” which linked high school performance with future opportunity, noted that “the longer term prospects of early labour market entrants, with only a secondary education diploma or less, as well as those who graduated late from upper-secondary school, are also of concern. They may fall victim to increasing competition for jobs from those better qualified in terms of job opportunities, stability of employment, and future earnings.” 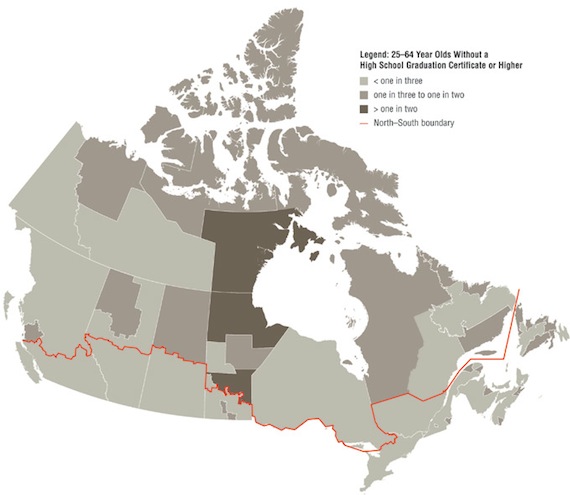 About one in two adults between the ages of 25 and 64 in parts of northern Saskatchewan, Nunavut, and northern Manitoba have not graduated from high school, shows this map from the Conference Board of Canada.