Bishop gets life, 16 years without parole for triple killing

“This should be a lesson that violence only spawns more violence” 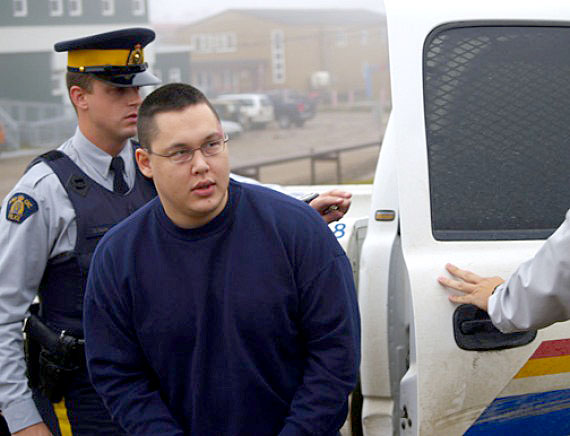 Chris Bishop enters the Iqaluit courthouse Aug. 26 for the start of a sentencing hearing. Bishop was convicted in June of three counts of second-degree murder and two counts of attempted murder in connection with a January, 2007 shooting in Cambridge Bay. (PHOTO BY CHRIS WINDEYER)

Chris Bishop will serve at least 16 years in prison for the second-degree murders of three men in Cambridge Bay and the attempted murders of two other people, which took place January 6, 2007.

Justice John Vertes gave Bishop a life sentence in an Iqaluit courtroom on the morning of Aug. 27.

The sentence followed a verdict by an Iqaluit jury, which found Bishop, 24, guilty on June 8 on all the charges against him: three counts of second-degree murder and two counts of attempted murder for a lethal spray of gunfire which killed Dean Costa, 29, Keith Atatahak, 28 and Kevin Komaksiut, 21, and wounded Logan Pigilak and Antoinette Bernhardt.

“Mr. Bishop feels extremely stung by the injustice of this verdict,” defence lawyer Scott Cowan told reporters after the judgment, adding his client plans an appeal.

Cowan said Bishop acted in self-defense, when he shot at least four men – all drunk and high on marijuana – who stormed into his house and kicked open his bedroom door after a long-simmering grudge.

In seconds, Bishop nearly emptied an illegal 30-round clip out of his semiautomatic rifle into his attackers, with 21 of the 25 shots hitting five victims as he chased them out of his house and continued firing from his front porch.

During arguments delivered Aug. 26 at the Nunavut Justice Centre, Crown prosecutor Carla Ball said the sheer number of shots fired should count as an aggravating factor in sentencing.

Ball argued Bishop waited in his bedroom “armed and ready to turn his intruders into his victims.”

Ball also introduced two victim impact statements, one by Lena Atatahak on behalf of the Atatahak and Komaksiut families and one by Beatrice Bernhardt, Antoinette Bernhardt’s mother.

One of the statements read “may you rot in Hell ‘til the day you die, and after that.”

Ball argued Bishop had used the attack against him as an opportunity to settle grudges against his attackers, and called the police twice in order to provide a cover story for his murderous intent.

But Cowan characterized Bishop’s actions as an “impulsive act,” driven by panic.

“What person with murder in their heart calls the police twice, begging for them to come over?” Cowan asked the court, repeating arguments he had made before the jury during the trial.

Vertes said he could not justify sentencing Bishop to that minimum because he committed three acts of second-degree murder, not one.

But Vertes rejected the Crown’s suggestion that Bishop had called the police as part of a cover for murder.

Vertes also condemned the “excessive violence” of Bishop’s actions, continuing to fire after he had chased his attackers out of his house, and then putting at least two rounds into the already lifeless corpse of Dean Costa as it lay on his porch.

Out of 30 rounds in the illegal clip on his unlicensed semiautomatic rifle, Bishop fired 25. Of those, 21 struck human targets.

In his sentencing judgment, Vertes denounced the “senseless violence” he’s seen in the North during his 33 years as a lawyer and judge, saying the victims share some of the blame for the tragedy of that night.

“This should be a lesson to everyone that violence only spawns more violence,” he said.

Bishop was also ordered to provide a DNA sample and is barred for life from owning guns and ammunition.

The 7.62-millimetre semi-automatic rifle used in the shooting will be destroyed.