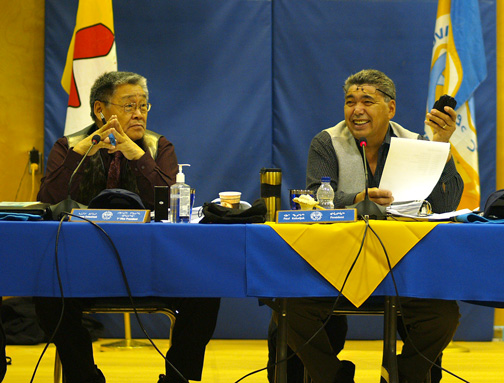 Paul Kaludjak has been suspended as president of Nunavut Tunngavik Inc. for running up a $52,000 tab on the organization’s credit card without following required procedures.

Delegates at an NTI board meeting passed the resolution Aug. 26. James Etoolook, the organization’s first vice president, will serve as acting president from Aug. 30 to Oct. 30.

“NTI will recover from the President the amount of $51,893.58 before June 30, 2011 through garnishment of wages or other periodical payments,” the resolution states. “The President’s credit card privilege will remain suspended until the above amount is fully recovered.”

The resolution also states that Kaludjak will be suspended with pay, but his “vehicle, cell phone, satellite phone and computer shall be returned to NTI” during the suspension. No criminal charges are expected.

NTI’s credit card policy states executives must make monthly credit card reconciliations, which Kaludjak “failed to do.” Eetoolook said Kaludjak was reminded several times to submit documents, which he didn’t do until May, 2010 when he handed in “16 months of incomplete reconciliation forms.”

In an interview Aug. 30, Kaludjak said the expenses he’s in trouble for included meals, entertainment and even NHL hockey games he’s hosted for “the premier, MLAs and beneficiaries.” (A spokesperson for Premier Eva Aariak said Aariak has never been to an NHL hockey game hosted by Kaludjak.)

“That’s very regular in our line of work,” he said. Eetoolook and Kaludjak both said none of the money Kaludjak owes stems from cash advances.

“I thought I was practicing what’s legal under the policy hosting beneficiaries,” he said. “Apparently I’m not allowed to do that anymore.”

Kaludjak also said that the president’s expense claims are supposed to be reviewed during meetings between the president and two vice presidents. “We’ve never done that,” he said.

Kaludjak said he disagrees with the board’s decision but said he will “live with it” and will pay back the money. He apologized for the delay in submitting his credit card claims, saying they should have been handed in sooner. But he also said the delay was caused in part when his briefcase, containing expense receipts, was stolen from his car.

Asked what he’ll do during his suspension, Kaludjak said “I’ve got two houses that I need to upkeep, so that’s what I’ll do to pass time.”

It’s not the first time Eetoolook has taken over after an NTI president left office in disgrace over credit card expenses. In June, 2001, then-president Paul Quassa stepped down after being caught running up a $30,000 tab on NTI’s corporate credit card, including $13,000 in unexplained cash withdrawals. Quassa repaid the money.

The news also comes as NTI announced proposed changes to its board structure that would eliminate executive portfolios and bring presidents of the regional Inuit associations onto NTI’s executive committee.