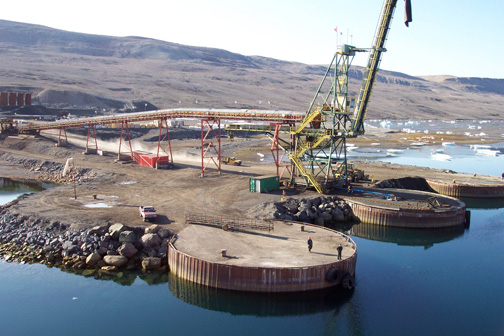 The port at Nanisivik is seen in this 2005 file photo. The Canadian Forces announced Thursday they’ve awarded a design contract for a naval fuelling station that could be in operation by 2014. (FILE PHOTO)

The $900,000 contract, the first of four design phases for the project, goes to North Vancouver, BC-based firm WorleyParsons Westmar. The contract amounts to planning construction for the multi-million dollar project at the abandoned dock at Nanisivik.

“Awarding this contract demonstrates the government’s commitment to ensuring Canada’s security and exercising sovereignty in the North,” said defense minister Peter McKay in a news release.

According to the company’s website, WorleyParsons Westmar has a lengthy list of industrial marine infrastructure projects under its belt, including the wharf at Deception Bay in Nunavik for the Xstrata nickel mine.

The Canadian Forces news release states the facility, which the military has described as a “gas station” that allows the Navy to stretch its range in the High Arctic, could be in operation by 2014. That would be in time for armed, ice-strengthened naval patrol ships which the Canadian Forces currently have on order.

Construction on the Nanisivk dock could start as soon as 2011.

It’s still unclear how much work needs to be done to bring the site up to military standards, or whether civilian cargo ships will be able to use the facility.