Researchers tracking the migration of the threatened red knot — a Canadian shorebird species in crisis because of failing food supplies — have documented the record-smashing flight of an individual bird that covered nearly 27,000 kilometres in a single year between its Patagonia wintering grounds in Argentina and a breeding site in western Nunavut.

With the help of a tiny “geolocator” attached to one of the red knot’s legs, the scientists recorded one remarkable, non-stop flight by the male bird that lasted eight full days and spanned 5,100 km between the southwest shore of Hudson Bay and an island in the Caribbean Sea.

During another five-day flight with more favourable weather and winds, the same bird — identified as Red Knot YOY for record-keeping purposes — covered 8,000 km in six days between Brazil and North Carolina.

That’s the greatest distance ever documented for a single, non-stop flight by a red knot. And the total migration path covered by the bird between May 2009 and May 2010 — 26,700 km — is described as not only a red knot record but “one of the longest recorded annual distances of any bird species.”

The tracking project was undertaken by a group of scientists from the United States, Argentina, Britain, Australia and Canada, including Royal Ontario Museum bird specialist Mark Peck. The results have been published in the bulletin of the International Wader Study Group.

Concerns about the red knot have risen sharply in recent years because supplies of horseshoe crab in New Jersey’s Delaware Bay — a key feeding stopover for the migrating birds — have become unpredictable.

Climate change is also considered a serious challenge because, as study leader Larry Niles told Postmedia News, “timing is a major factor” for red knots and other species that migrate long distances and depend on optimal feeding or breeding conditions when they arrive.

“There’s only a short window of time when the weather is just right in the Arctic for breeding,” said the New Jersey-based biologist.

And in the case of Delaware Bay and other southern coastal areas that comprise the red knot’s critical habitat, “these beach areas are being developed for recreation or used for recreation by humans — we’re directly competing with them,” said Niles.

Niles said the flight of Red Knot YOY has shed new light on the “amazing” journeys carried out by the birds, which can lose nearly half their weight during their longest flights, to 100 grams or less, from 180 grams.

The geolocators, which were fitted to 47 birds captured at Delaware Bay in 2009 and retrieved from three of them at the same site in 2010, revealed that red knots are sometimes forced to fly an extra 1,000 km or more to detour around storms.

“Global warming models suggest increases in the frequency and strength of tropical storms,” Niles stated in a summary of the study. “If this happens it could be devastating to shorebirds’ southward migration.”

He said experts have long known that “reaching the Arctic in time for breeding requires long-distance northbound flights, thereby making quality stopovers, in places such as Delaware Bay, so critical for resting and refuelling.

“The surprise here was that after the breeding season all three birds with geolocators also made long-distance return flights, highlighting the importance of southbound stopover sites such as Cape Cod in Massachusetts, and New Jersey’s Atlantic coast.”

Niles said the red knot’s physiology has evolved for maximum flight endurance, with digestive organs gradually shrinking during feeding season to allow greater fat storage in the last days ahead of a long flight.

The bird’s remarkable annual range stretches from the southern tip of Argentina to Northern Canada, where key breeding sites include King William Island along the Northwest Passage and Southampton Island at the north end of Hudson Bay.

The study also identified previously unknown stopover sites for the species, including one on the Hudson Bay shore near Churchill, Man. 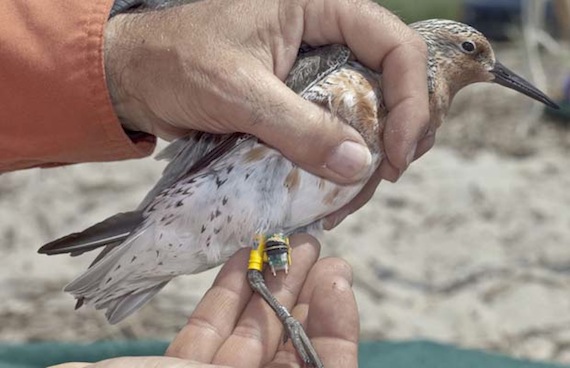 The sunrise- and sunset-sensitive geolocator on this Red Knot’s leg records day-length wherever the bird goes during its annual migration cycle. Researchers then analyze these data recordings to track its journey.(PHOTO/JAN VAN DE KAM)