Polling clerks in Kuujjuaq count votes on the evening of April 27 under the watchful eye of the referendum’s deputy director, Ian Robertson. Only 1,400 voters, or 34 per cent of those who cast ballots, said “yes” to the final agreement which called for the creation of a Nunavik Regional Government. That final number fell well below the numbers required to ratify the final agreement. Updated results on the vote are available at http://bit.ly/iOyMqa. (PHOTO BY SARAH ROGERS) 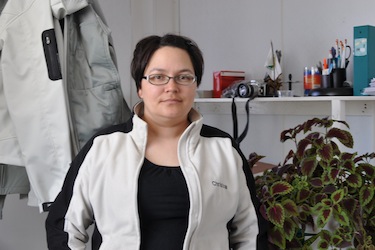 “I think we’ll have every opportunity to to renegotiate with more powers and leverage on our side,” said Kuujjauq resident Christine Nakoolak, following the April 27 rejection of the NRG. (PHOTO BY SARAH ROGERS)

KUUJJUAQ – Voters in Nunavik responded to the Nunavik Regional Government proposal with a resounding “No” in a region-wide referendum held April 27.

A news release from the director of Quebec elections — written in French only, late in the evening — said 2,842 voters, or 66 per cent of the 4,293 people who voted, rejected the NRG’s final agreement.

The referendum question: “Do you approve the final agreement on the creation of the Nunavik Regional Government?”

After months of heated debate on the new governance model, only 1,400 voters, or 34 per cent, said “yes.” Of the registered eligible voters only 17.76 per cent voted “yes.”

That final tally fell well below the number of “yes” votes required to approve the final agreement.

According to the referendum rules, the deal could only be ratified if more than 25 per cent of all 7,881 eligible voters, or at least 1,971 voters, said “yes.”

Overall, voter turnout in the referendum was 54.5 per cent.

Twenty-six per cent of eligible voters who live outside Nunavik participated in the referendum by special ballot or in person at a Montreal polling station.

In Inukjuak, where voter turnout reached 80 per cent, voters came out with the strongest “no” vote, with a “yes” vote of only 11.5 per cent.

The strongest support for the NRG came from Aupaluk, Nunavik’s smallest community of 150, where 47 per cent of the eligible voters said “yes.”

In Kuujjuaq, Nunavik’s largest community, the turnout was 46 per cent.

Almost three-quarters of Kuujjuaq voters rejected the agreement, with only 13.3 per cent of the eligible voters there saying “yes.”

In Kuujjuaq, Christine Nakoolak, stayed at home with her family on Wednesday evening, waiting for results to come in. She told Nunatsiaq News that she was surprised, but “pleased” to see the “no” vote finish so far ahead.

Nakoolak said she was disappointed with the final agreement after it called mainly for an amalgamation of Nunavik’s existing organizations, and was short on plans to allow Nunavimmiut more control over regional decision-making.

“I expected that all these years, they would have negotiated for more powers,” said Nakoolak, manager at Kuujjuaq’s Nayumavik Landholding Corporation. “When I read the draft agreement, I saw there was no guarantee.”

Nakoolak was hoping to see Nunavik become a more autonomous region, with the ability to make its own laws and to better protect the Inuit language and culture.

The NRG provided for a merger, which would have joined existing regional bodies like the Kativik Regional Government, the Kativik School Board, and the Nunavik regional board of health and social services, putting them under the authority of a new elected body called the Nunavik Assembly.

As part of a second phase, the NRG would have been part of negotiations for a second agreement, one which “could” provide new powers to the regional government.

But the “could” wasn’t a strong enough assurance for many voters like Nakoolak who want to see Nunavik grow more independent from provincial and federal governments.

Discussions on the final agreement became increasingly divisive in the weeks leading up the referendum. Voters found a common area to vent their concerns about the referendum — a Facebook site dedicated to the NRG, which attracted nearly a thousand members.

Now, 13 years after the process leading up to the April 27 started up, Nunavimmiut go back to the drawing board.

Negotiators said rejecting the final agreement on the NRG would add many years to the process, but Nakoolak doesn’t think that’s the case.

If anything, any future negotiations will draw more interest and participation from those impacted most, she said.

“I don’t think the door will be closed,” she said. “I see more involvement among young people.”