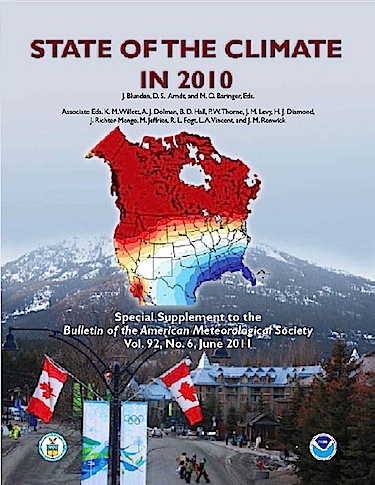 The Arctic air, land and water continue to change as the world’s climate changes, says the 2010 State of the Arctic report, released this week by the National Oceanic and Atmospheric Organization.

Worldwide, 2010 was one of the two warmest years on record, says the 2010 State of the Climate report, released June 27 by the U.S. National Oceanic and Atmospheric Administration.

On the Arctic, the State of the Climate shows how 2010 marked the end of the warmest decade since instrument records began in 1900.

The summer of 2010 in Greenland reveals the speed and breadth of the environmental change occurring in the Arctic, the report says.

High summer air temperatures and a longer melt season also occurred in the Canadian Arctic, where loss from small glaciers and ice caps continued to increase.

The Arctic section of the State of the Climate says:

• Arctic sea ice extent in September 2010 was the third lowest of the past 30 years. After a record minimum summer sea ice cover in 2007, the upper Arctic Ocean remains relatively warm and fresh, instead of salty, “a condition that is affecting marine biology and geochemistry;”

• on Sept. 19, 2010, ice extent shrank to its annual minimum of 4.6 million square kilometres. That’s the third-lowest minimum recorded since 1979, higher only than 2008 and the record minimum in 2007. There has been a substantial loss of old, thick ice in the Arctic Basin compared to the late 1980s, with the pack ice in the central Canada Basin changing from a multi-year to a seasonal ice cover;

• “surface air temperatures through the 2010 summer were higher than normal throughout the Arctic, though less extreme than in 2007;”

• there was more warming in relatively cold permafrost than in warm permafrost in 2010; and,

You can read a full report and a highlights document online.