ICC’s dilemma: oil versus the environment

“The Arctic is on a threshold” 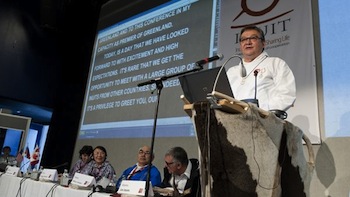 Greenland’s premier Kuupik Kleist tells about 300 delegates and observers at Nuuk’s Katuaq conference centre on June 28 that he wants ICC “to look at the experiences other Arctic regions have with oil exploration in order to come up with proposals for securing our interests.” (PHOTO BY LEIFF JOSEFSEN, SERMITSIAQ) 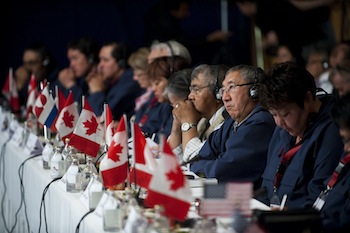 Delegates to the Inuit Circumpolar Conference general assembly in Nuuk include Canadian Inuit from all Inuit regions, as well as Inuit from Chukotka, Alaska and Greenland. (PHOTO BY LEIFF JOSEFSEN, SERMITSIAQ) 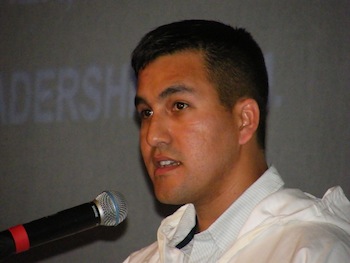 The Inuit Circumpolar Council needs to work with youth, said Carl Weisner, the vice-president of Alaska’s Northwest Borough — the youngest speaker June 28 during the first session of ICC’s four-day assembly in Nuuk. (PHOTO BY VICTORIA SIMIGAQ)

When the Inuit Circumpolar Council’s four-day general assembly got started June 28 in Nuuk, Greenland, Inuit delegates heard a mixed set of messages about how to combine economic development with environmental protection.

The assembly’s theme may have been “Sharing Life,” but differences among Inuit leaders over offshore oil exploration surfaced immediately.

And if there was a common thread among speakers, it’s that Inuit need to work together and not shy away from debate.

Kleist told about 300 delegates and observers at Nuuk’s Katuaq conference centre that he wants ICC “to look at the experiences other Arctic regions have with oil exploration in order to come up with proposals for securing our interests.”

For Greenland, these “interests” include achieving more independence from Denmark.

But the continuing Deepwater Horizon oil spill disaster in the Gulf of Mexico demonstrates there was a lack of regulatory control over the oil company British Petroleum, as well as a lack of public input into BP’s activities, said Reggie Joule, an Alaskan state representative and an ICC delegate.

Arctic development without benefits for Inuit is “a form of colonialism,” Joule said.

“We must not be shut out of those processes,” he said, urging Inuit to communicate “more than we have been lately.”

In her welcoming to the ICC general assembly, Asii Chemnitz Narup, the mayor of the huge Sermersooq municipality that includes Nuuk, and the co-host of the organization’s 11th general assembly, called on Inuit mayors to work more closely together.

“We know from other Inuit societies that it takes an enormous political effort to ensure that riches form the foundation of freedom and independence, while at the same time maintaining the respect for nature’s balance,” Narup said.

Cooperation is the way to better manage development, said ICC’s current president, Jimmy Stotts of Alaska, in his president’s report to the assembly.

The Arctic Council — where ICC is a permanent participant — remains the “most significant tool” for this.

“The Arctic is on a threshold. There are things we talked about 30 years ago, that we hoped we could never see,” Stotts said.

Stotts acknowledged that there is no way to turn back the clock, a theme also emphasized by Carl Weisner, the vice-president of Alaska’s Northwest Borough, in remarks urging ICC to turn its attention to youth.

During the four-day meeting in Nuuk, delegates — planned to discuss economic development, the environment, hunting and food security health and well-being along with governance.

The environment and economic development are intertwined, said Aqqaluk Lynge, the president of ICC-Greenland, who has publicly criticized exploratory oil drilling off Greenland.

Greenland takes over the presidency of the ICC at the end of the assembly, with Lynge expected to win the July 1 election to the four-year position.