The 15 teams are competing in the Ivakkak 2011 race 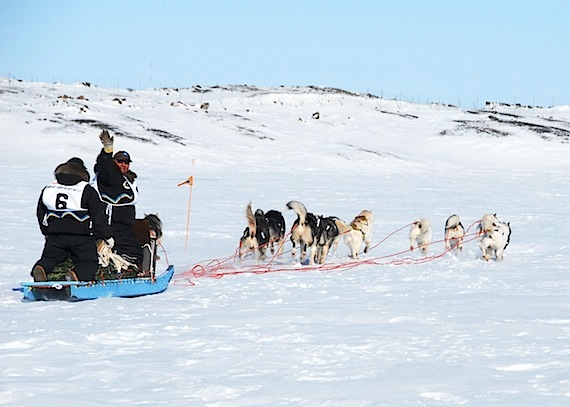 Allen Gordon of Kuujjuaq, one of 15 mushers in this year’s Ivakkak dog team race in Nunavik, waves goodbye after as he leaves Puvirnituq on March 28. (PHOTO BY ISABELLE DUBOIS/NUNAVIK TOURISM) 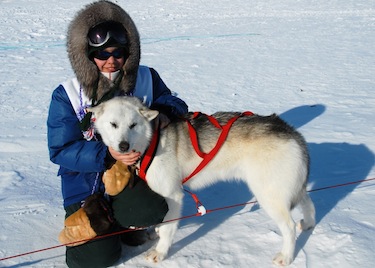 Minnie Ningiuruvik, the only woman participating in Nunavik’s 2011 Ivakkak dog team race, poses with one of her dogs in Puvirnituq just before the start of the race on March 28. (PHOTO BY ISABELLE DUBOIS/NUNAVIK TOURISM)

If you’re flying up Nunavik’s northern Hudson Coast this week, look down to see if you can spot some of the 171 huskies racing across the tundra.

These dogs belong to the 15 teams racing in the 10th edition of Ivakkak, Nunavik’s annual dog-sled race.

Each Ivakkak team includes two mushers, as well as a qamutik and 10 to 12 dogs harnessed in the Inuit fan style.

Race participants are now en route to Akulivik. From there, they will cut across Nunavik’s northwestern tip to the race’s finish line in Salluit on the Hudson Strait.

The 356-kilometre trek is expected to take about six days to complete.

This year, the 15 teams competing for in the race include the winner of the 2010 race, Willie Cain Jr..

In 2010, 16 teams raced from Quaqtaq to Kuujjuaq, taking 10 days due to poor weather conditions.

Tasiujaq mushers Willie Cain Jr. and Joseph Cain crossed the finish line first with a time of 40 hours and 16 minutes.

2011 marks the first year that a veterinarian is participating in Ivakkak. Julie Ducrocq, who has previously in the region, has already treated about a dozen dogs suffering from minor injuries to their paws from the rough terrain, said an Ivakkak news release.

Ivakkak was first hosted by Makivik Corp. in 2001 to encourage the practice of dog-sledding.

Since the race’s launch, dog teams have cropped up in many Nunavik communities, particularly along the Ungava coast.

Ivakkak’s prizes are a good incentive for mushers, too – winners take home $12,000 in gift certificates from the Fédération des coopératives du Nouveau-Québec, $7,000 in cash from Makivik Corp., and a trip to Montreal courtesy of First Air and Air Inuit.

Ivakkak took a year off in 2008, but due to demand the race has returned as an annual event.

Only Inuit are eligible to participate in the race.