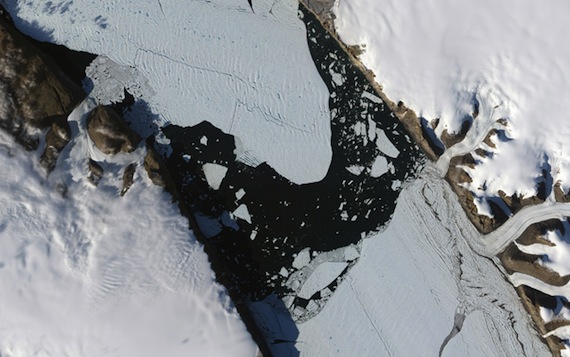 This NASA Earth Observatory image shows the ice island that calved off the Petermann Glacier in northwestern Greenland on August 5, 2010.

OTTAWA — What looks like a tablet for the world’s biggest headache is headed down the Hudson Strait to Labrador.

It started out as a 251-square-kilometre ice island but has trimmed down somewhat, to roughly 64 square kilometres, says Dan Frampton, superintendent of ice operations in the Canadian Coast Guard Newfoundland region.

“It is massive — it’s not high, like you would see in big icebergs, but it’s a large mass of ice,” says Frampton. “It’s like a big tablet, or an island.”

Ice islands neither rise as high as icebergs — this one is only about 50 to 60 metres above water level, he says — nor do they carry nine-tenths of their mass under water, which is the standard calculation for an iceberg’s size, though Frampton says this one would still have significant depth.

The ice island broke off the glacier on Aug. 5 last year, the second massive iceberg to calve off a Greenland glacier in a month. An iceberg the size of the island of Manhattan — about 61 sq. km — fell off Greenland’s Jakobshavn Isbrae glacier last July.

Frampton says recent satellite imagery shows about six to 10 pieces have broken off the iceberg, some of them as small as five metres and some larger ones as big as 100 to 200 metres long. The bergy bits — the scientific term for small bits of glacier ice — travel together to some degree, Frampton says, though some have gone to ground, and the rest have spread out quite a bit.

It has managed to maintain the majority of its mass because so far it’s had an easy ride — travelling through ice-covered water during the winter months it wouldn’t have seen a lot of sea action.

As it hits open water, “you get all these things that have significant impacts, including longer daylight hours, which has an impact on its melting; and of course the sea action, the wave action, will have an impact on its breakup,” says Frampton.

Between Wednesday and Thursday scientists calculated that the ice island had speeded up as it hit the Labrador current and was moving at the rate of about one-third of a knot — a little more than half a kilometre an hour.

The ice island is headed to the Labrador Sea, but Frampton says it’s too early to tell what direction it will take once it moves into more southerly waters.

The ice island was the largest iceberg to form in the Arctic since 1962, when a 600-sq-km berg calved off the Ward Hunt Ice Shelf, on the north coast of Ellesmere Island, according to experts at the University of Delaware.