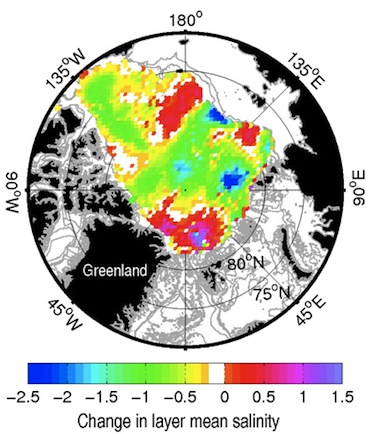 In this image, you can see the changes in the average salt level of the Arctic Ocean between 2006 to 2008 and 1992 to 1999. The colours yellow, green, and blue show where scientists measured an increased amount of fresh water. (IMAGE/ BENJAMIN RABE, ALFRED WEGENER INSTITUTE)

More fresh water is pouring into the Arctic Ocean as glaciers melt, raising concern among some scientists.

The fresh water content of the upper layer of the Arctic Ocean has increased by about 20 per cent since the 1990s, say scientists from Germany’s Alfred Wegener Institute.

They predict this increase may alter the world’s ocean currents, with potentially disastrous results.

This fresh water from melting glaciers that pours into the upper layer of the Arctic Ocean is likely to flow out into the North Atlantic. There, it may impact on global ocean circulation and disrupt the flow of the Gulf Stream, say researchers from the Alfred Wegener Institute in the journal Deep-Sea Research.

If that happpens, places like Greenland, Iceland, Norway and parts of Europe, which are warmed by this powerful ocean current, could actually cool off.

The fresh water on top of the Arctic Ocean is important because this surface water controls the amount of heat that escapes. Like a blanket, fresh water usually lies on top of the deeper salty and warm ocean layers and cuts off their heat flow to the ice and atmosphere.

Changing the balance between the cold and warm layers could change the way ocean currents form and travel, scientists says.

To measure the depth distribution of the salt concentration, researchers used sensors from ships or mounted sensors on large ice floes so the data could be recorded as the ice drifted through the Arctic Ocean.

New research by scientists at Woods Hole Oceanographic Institution also shows the Arctic Ocean is bringing more heat to Greenland’s glaciers, causing them to melt even faster and pour more fresh water into the ocean.

A research team discovered warm, subtropical waters deep inside Sermilik fiord at the base of Helheim glacier in 2009.

“We knew that these warm waters were reaching the fjords, but we did not know if they were reaching the glaciers or how the melting was occurring,” said Fiamma Straneo, lead author of a study published online in the March 20 edition of the journal Nature Geoscience.