“We dodged a bullet on this” 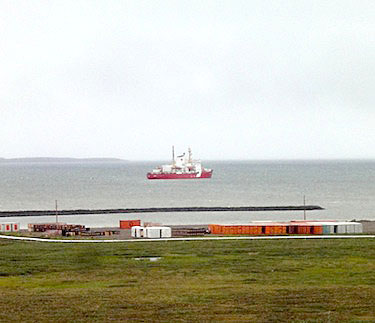 The rescue of a cruise ship stranded on a rock in Arctic waters over the weekend is raising questions about whether Canada would have the ability to respond quickly enough to a true disaster in its Far North.

The grounding of the Clipper Adventurer — which struck an uncharted rock in the waters of western Nunavut — is also highlighting concerns about the adequacy of existing nautical maps as rapidly melting sea ice continues to open up new shipping routes.

“We dodged a bullet on this,” said Michael Byers, a University of British Columbia political science professor and Arctic expert. “The weather was good and that provided the time for a coast guard ice breaker to travel 500 miles to conduct a rescue.”

The Amundsen arrived in on the scene Sunday to help remove about 200 passengers and crew from a cruise ship that ran aground shortly after 7 p.m. local time Friday.

The Clipper Adventurer, operated by Mississauga, Ont.-based Adventure Canada hit a rock in about three metres of water, about 55 nautical miles east of Kugluktuk, near the border with the Northwest Territories.

The ship ran aground just one day before its 15-day Arctic expedition was to come to an end.

The passengers and crew aboard the ship were said to be safe and unharmed and Sunday evening were being transferred to the Amundsen, which stood about four nautical miles away, on small vessels.

“They are now being ferried to the Amundsen ice breaker and then will be transported into Kugluktuk,” said Canadian Fisheries spokeswoman Theresa Nichols Sunday evening, adding the transfer would take about four hours to complete.

Cedar Bradley-Swan of Adventure Canada said getting to Kugluktuk could take the coast guard vessel “anywhere from 5 1/2 to eight hours” and a chartered 737 jet would then fly passengers to Edmonton early Monday.

According to the company, the sea was calm at the time of the ship’s grounding, visibility was good, it was sunny and there was no wind or swell.

The company said efforts to dislodge the vessel during high tide Saturday were unsuccessful and that it was stable but sitting with a slight list.

“We have tried … but she’s just too far lodged on to the rock to get off on her own power,” Bradley-Swan said. “She’s stuck.”

While icebreakers like the Amundsen, which is based in Quebec City, are often working in various parts of the Arctic during the busy summer months, Byers said that might not be enough.

He cautioned things may not have had such a happy ending had the weather been bad.

He also questioned what would have happened if the ship had been sinking, or if there had been some kind of medical emergency, noting that cruises often cater to retirees or the elderly.

Pointing out that Cormorant search-and-rescue helicopters are the most effective tools in rough weather, he suggested Canada should consider having one permanently based in the North during the summer.

“The increase in traffic is almost exponential, and we’re not prepared for that,” he said, noting there were 69 transits of the Northwest Passage in the 100 years up to and including 2006.

Last year alone, there were 24.

Byers also questioned whether funding for nautical charts produced by the federal government ought to be increased.

Adventure Canada CEO Matthew Swan was among those aboard the ship that went aground.

He told the CBC on Sunday there was no damage to the ship and that it had simply got stuck on a rock that never made it onto their chart.

Passengers, he said, were taking it all in stride.

“Conditions are good. We’ve actually had two full days of sun and flat calm seas and people have actually been on the deck taking in the sun, if you could believe it,” he said.

Jean-Pierre Sharp, a coast guard officer with the Joint Rescue Coordination Centre in Trenton, Ont., said the passengers were in no danger and that there was no risk of pollutants leaking from the vessel into the water.

“It’s just a question of getting the people off and for the company to arrange some salvage or something to try and tow the vessel off the ground,” he said.

The ship had reportedly been travelling from Port Epworth to Kugluktuk when it got stuck. The trip began in Greenland.

According to the company’s website, the Clipper Adventurer is 90 metres in length and features a library, gymnasium, sauna and beauty salon.