The federal election in Nunavut: Zzzzzzz 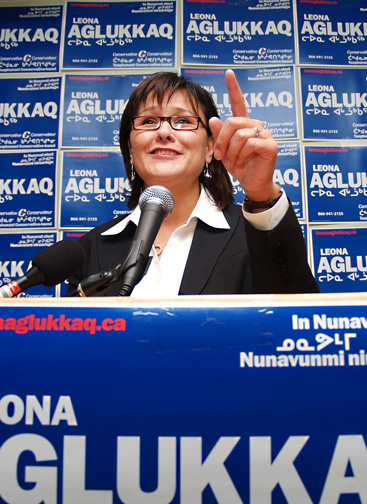 Leona Aglukkaq speaks to supporters in Iqaluit after her Oct. 2008 federal election win. So far, Aglukkaq is the only candidate running inthe May 2 vote, though the Liberals and New Democrats say they’ll name candidates soon. (FILE PHOTO)

Leona Aglukkaq will seek a second term as Nunavut’s member of Parliament in the May 2 federal election.

But as of March 29, Nunavummiut were still waiting to learn what their other choices at the polls are.

The Liberals and New Democratic Party had yet to nominate candidates by March 29.

James Pratt, the NDP’s candidate search coordinator, said the local riding association is still looking for someone to run in Nunavut.

“We’ve approached a bunch of folks who, for various family reasons, have said that now is not the time, but there’s a couple of interesting folks that we’re talking to now and we’ll have a candidate shortly,” he said.

And a Nunavut Liberal confirmed the local riding association is still seeking a candidate. Kirt Ejesiak, who ran for the Grits last time, announced in 2009 he wouldn’t run again.

The Green Party had one, Paul Azzarello, an Ontario-based telecommunications worker. But party spokesman Kieran Green said Azzarello “had to end his candidacy for personal health reasons. We are currently seeking a new candidate.”

Aglukkaq’s team meanwhile opened up their Iqaluit election headquarters March 29, although campaign staff were waiting for the phones to be hooked up.

Election day is May 2, with advance polls April 22, 23 and 25. Go to the Elections Canada website for voter information in English and French.