“Operations continued smoothly and there were no security issues” 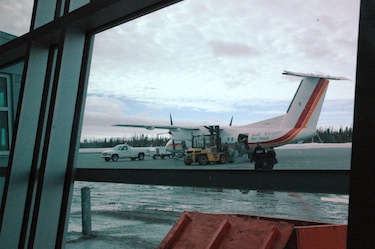 A bomb threat slowed traffic down Aug. 30 at Kuujjuaq’s airport, causing passengers to disembark a flight and pass through security. (FILE PHOTO)

Flights to and from Kuujjuaq came to a halt for a period of time on Aug. 30 after a prankster called Air Inuit to plant a false warning that a friend of his, a passenger travelling with the airline that day, was carrying a bomb.

“Hoax” is a good word to use to describe the call, said Air Inuit spokesman Christian Busch, although Busch was unwilling to say much else about the incident.

“Operations continued smoothly, and there were no security issues,” he said. “We followed our internal procedures… which we cannot disclose.”

The matter now lies with the police, Busch said.

A source told Nunatsiaq News that police immediately questioned a person at the Kuujjuaq airport.

Police have not yet returned calls seeking more information.

Passengers travelling on Air Inuit say the incident led to delays at Kuujjuaq’s airport after officials asked passengers to disembark for security screenings.