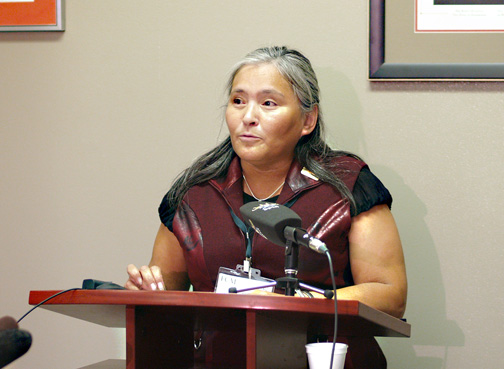 Iqaluit mayor Elisapee Sheutiapik speaks during a news conference in Iqaluit Aug. 31. The Federation of Canadian Municipalities published a new report calling on the federal government to undertake a long-term project to improve municipal infrastructure in the North. (PHOTO BY CHRIS WINDEYER)

The report, released in Iqaluit Tuesday, calls on Ottawa to piggyback Northern infrastructure spending on the military expansion that’s already taking place in the region.

“We need to make the most of every dollar we invest in the North,” the report states. “We need to define success as more than a short-term increase in drilling, mining and projecting military power.”

“We need to lay the foundation for sustained growth and prosperity in northern communities to lift northerners out of poverty while supporting Canada’s long-term economic and military interests in the region.”

Hans Cunningham, president of the FCM, said Ottawa’s Northern Strategy, which lays out a vision for economic and social development, governance, sovereignty and environmental protection, is welcome.

But Cunningham said northern municipalities need stable long-term funding to build badly-needed basic infrastructure. “Northern communities do not have the resources needed to achieve the objectives of the Northern Strategy,” he said.

Iqaluit mayor Elisapee Sheutiapik said Nunavut’s municipalities are “trying to keep up with the growth” in demand for basic services such as solid waste, water and recreation. That’s happening even as the federal government moves ahead with big-ticket items like a military deepwater port in Nanisivik and a new research station in Cambridge Bay.

Sheutiapik said she hopes the FCM’s report sends the message to Ottawa that federal departments have to work with one another, as well as other levels of government to formulate a long-term infrastructure plan.

“We all have to work together,” she said. “Partnership has to be the policy here.”

The report, authored by Arctic experts Ken Coates and Greg Poelzer, suggest that partnership could start with the Canadian Forces. It said the federal government should make future military investments with “civilian and private sector interests in mind” and “form the foundation for long-term development in the region.”

It also urges the federal government to build “world-leading information technology infrastructure” for the North, in cooperation with the military. Ottawa also needs to compile an inventory of infrastructure needed by Arctic communities, the report states.

“This plan should not take the form of a community-by-community shopping list,” it reads, “but rather a description of the needs and requirements of northern communities, a set of standards connected to what southern Canadians take for granted and consistent with international circumpolar standards.”

Taking part in the Iqaluit news conference by telephone, Coates said the historical pattern of development in Canada’s North has been one of “neglect and occasional interest.”

But he said that’s starting to change, thanks to climate change and growing interest in the region by non-Arctic countries in Asia and the European Union.

Meanwhile, Canada is lagging behind other Arctic countries in spending on everything from research and universities to military bases thanks to a “checkbook mentality” which puts off major investments until governments end up scrambling to meet basic needs.

But investments in transportation, municipal services and education will pay back long-term benefits to Canada, Coates said.

“The North will, over time, generate a huge amount of revenue for Canada as a whole from its natural resources and from the other economic development that will occur there,” he said.

“It’s important to start tying those resources to the actual development of the region itself.”