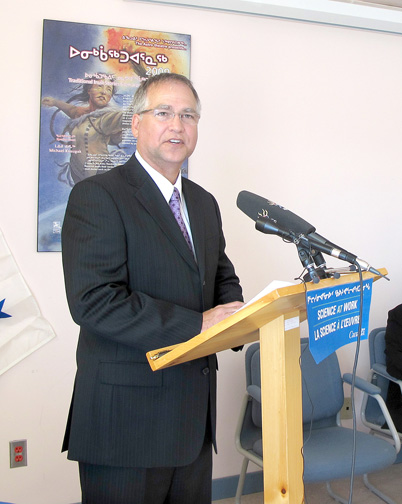 Gary Goodyear, federal Minister of State of Science and Technology, announced Aug. 30 that Ottawa will spend $1 million over 6 years to help Arctic College and Laval University research and document the history of Inuit leadership in Nunavut and Nunavik. (PHOTO BY GABRIEL ZARATE)

The federal government is putting $1 million into documenting the history of leadership among Inuit communities.

Gary Goodyear, Minister of State for Science and Technology, made the announcement at Nunavut Arctic College’s Nunatta Campus in Iqaluit on Aug. 30.

“As has been demonstrated over the past eleven years since the territory was created, Inuit culture, language and history are critical components to Nunavut’s governance,” Goodyear said.

Goodyear said the project would “build a body of knowledge on Canadian Inuit leaders and will be used to educate and inspire young Inuit across the North.”

The next such book will be called Inuit Women in Leadership and Governance, to be released in mid-September, said Nunavut Arctic College president Dan Vandermeulen.

“I expect to see more of the kind of volumes you can already buy at Arctic Ventures,” Vandermeulen said.

The project will also document traditional strategies of governance in Inuit communities, researched through interviews with elders in Nunavut and Nunavik.

The project is a collaboration between Laval University and Nunavut Arctic College.

Another aspect of the project is to employ young Inuit as researchers, which creates a local capacity for research, said Louis McComber, a Laval University professor, in a video message.